Home I The Team I First Team Squad I 15. Eric Dier 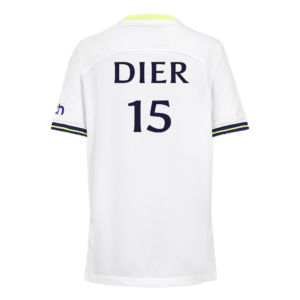 Eric Dier, standing at 6ft 2 is predominantly a centre back, but he can also be utilised as a defensive midfielder. He joined Tottenham Hotspur in August 2014, and is a very physical player who is adept at winning aerial duels and is a difficult player for opposition players to get past.

He began his career in Portugal with Sporting CP with whom he became a professional in 2010. He made his debut in a 1-0 league win over Braga, providing an assist for the winning goal.

He spent two years in Sporting’s first team before Mauricio Pochettino signed him for Tottenham in 2014.

Overall, Dier made 32 appearances for the Portuguese club, scoring a goal and providing 5 assists.

He made his debut for Spurs in August 2014 against West Ham, where he scored his first goal for the club. He made 28 Premier League appearances in the 2014/15 season scoring 2 goals and getting 2 assists in total which saw the club finish 5th.

Spurs came within a few points of winning the league title in 2015/16 but ultimately lost out to Leicester City, finishing 3rd on 70 points. Dier played a crucial role, playing 37 of the 38 games where he found the net 3 times and he directly created 2 goals. In all competitions he made 51 appearances scoring 4 times and providing 2 assists.

The Lilywhites came even closer to winning the league title in Dier’s third season at the club (2016/17), finishing 2nd with 86 points. Dier made 36 appearances that season in the Premier League, scoring twice.

Eric made 47 appearances across all competitions in the 2017/18, with 34 of those coming in the Premier League. He got 2 assists on the way to finishing 3rd in the league that season, amassing 77 points finishing behind only Manchester United and Manchester City.

Dier only made 28 appearances in all competitions for Spurs in 2018/19, but he still managed to contribute 3 goals in his 20 appearances in the Premier League with the club finishing 4th with 71 points.

Not only that, Spurs also made the Champions League final, but lost 2-0 to Liverpool.

The England international played 30 matches in all competitions in 2019/20 making 19 in the Premier League where he managed to provide 2 assists for his teammates. Spurs still qualified for European football that season too, finishing 6th with 59 points.

The following season (2020/21) Dier made 28 appearances in a season which saw Spurs finish 7th.

So far this season, he has made 14 Premier League appearances scoring 2 goals so far.