Home I The Team I First Team Squad I 14. Ivan Perisic 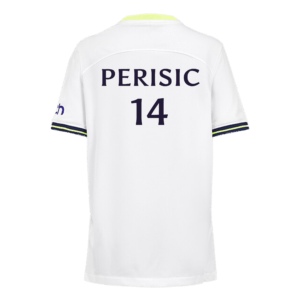 He recently signed for Spurs on a free transfer from Inter Milan.

Perisic began his career with Hajduk Split, where he moved on to French club FC Sochaux in 2006. He spent three years at the club, which included a successful loan spell at KSV Roeselare, where he scored 8 goals and got 2 assists in just 20 appearances.

In 2009, after his successful spell with Roeselare, he signed with Belgian heavyweights Club Brugge on a permanent deal for €200k.

In his 89 appearances, he scored 35 goals with 23 assists to boot. This prompted the interest of German giants Borussia Dortmund who signed him for €4M in May 2011.

Perisic was handed his senior debut with Croatia in March 2011, making his debut against Georgia and went on to participate in the European Championships in 2012.

Perisic was a key member of the squad, making an appearance in 28 of Dortmund’s 34 games that season, scoring 7 goals and providing 3 assists.

The Croatian was also a crucial part of that season’s League Cup success, scoring a goal and providing 3 assists in 6 matches.

Overall, Perisic scored 12 goals in his 64 appearances for Dortmund whilst also providing 7 assists.

He left the club to join fellow German team VFL Wolfsburg in January 2013 for €8m.

In his first full season with the club (2013/14), Perisic appeared in all but one of Wolfsburg’s 34 Bundesliga matches, scoring 10 goals with 5 assists. The club finished in 5th place that season, with 64 points.

The Croatian was also part of the Wolfsburg squad that won the DFB Pokal in the 2014/15 season – his second in three seasons.

Overall, he scored 21 goals and got 17 assists in his 88 appearances for the club.

A loan to Bayern Munich saw him part of the team that won the 2020 Champions League title, contributing 3 goals and 3 assists along the way.

He was also part of the team that won the DFB Pokal and Bundesliga title in the same season. Overall, he scored 8 goals and got 10 assists during his 35 game spell at Bayern.

Back in Milan he once again had success, this time in Serie A, where he was part of the squad that won the 2020/21 title making 32 appearances and contributing 4 goals and 5 assists.

Overall, he scored 55 goals with 49 assists in his 254 appearances before moving to Tottenham on a free transfer in 2022.

Perisic has so far made 20 appearances in all competitions for the Lilywhites, providing an impressive 7 assists to date.