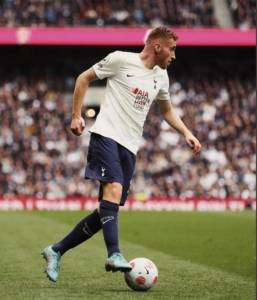 Dejan Kulusevski, a forward standing at 6ft 1in is a Sweden international footballer who signed for Spurs on loan from Juventus in January 2022.

Kulusevski began his career in his native Sweden with IF Brommapojkarna. He remained at the club until 2016, when he was signed by Atalanta, where he played for the club’s academy teams.

Dejan made his senior club debut for Atalanta in a 5-0 Serie A win against Frosinone as a substitute. He only made 3 appearances, spending the remainder of his time as an Atalanta player out on loan at Parma.

The Sweden forward signed on a season long loan for fellow Serie A side Parma in July 2019. Over the course of the season, he made 39 appearances in all competitions where he provided 9 assists for his teammates whilst scoring 10 goals.

Kulusevski impressed in the 2019/20 season, so much so that Italian giants Juventus signed him in January 2020 for £29.7m (€35m), before he was sent back on loan to Parma for the remainder of the season.

He earned his first senior Sweden cap when he came on as a substitute in Sweden’s 3-0 win against the Faroe Islands in November 2019.

His first full season at the Old Lady was the 2020/21 season. He made his debut for the club in September 2020 in a 3-0 Serie A win against Sampdoria, scoring on his first appearance for the club.

He made 35 league appearances that season, scoring 4 goals whilst providing 3 assists. Juventus finished 4th in Serie A on 78 points, and only a single point behind 2nd place AC Milan with Inter Milan winning the league title that year.

The 2021/22 season was Kulusevski’s second at the club. He made 20 league appearances in the first half of the campaign, scoring once and providing 3 assists before signing on loan for Premier League heavyweights Tottenham Hotspur in January 2022.

The Swedish forward signed for Antonio Conte’s Tottenham Hotspur on an 18 month loan spell with an option to buy, on deadline day during the 2022 January transfer window, signing on the same day as Uruguay midfielder Rodrigo Bentancur.

Kulusevski made 18 appearances in the latter half of the 2021/22 season, making 18 league appearances for the club, scoring 5 goals, whilst going on to provide 8 assists for his teammates.

He has been one of Spurs’ in-form players during the current season (2022/23), with 9 appearances made so far with 5 assists and a goal to his name.

How are Spurs players doing at the 2022 World Cup so far?