The new Tottenham Hotspur stadium has been praised by many as one of the finest in world football, and when you step through the turnstiles it is easy to see why. With nearly 30,000 more seats than the old White Hart Lane, the stadium’s 62,062 capacity makes for an atmosphere like no other, while its futuristic design ensures a panoramic view of the pitch for every fan.

The new stadium has been specifically designed with the matchday experience in mind, meaning every supporter feels up close and personal to the action. At 17,500 seats, the ground’s South stand is the largest single-tiered stand in the UK, with each and every chant reverberating around the ground thanks to the stadium’s innovative design.

Seats offer more comfort, are closer to the action and provide more space than at the old White Hart Lane, while the concourse areas have a distinctly modern feel about them, offering a wider selection of refreshment and retail options than ever before. This includes the new Spurs shop, which at 23,000 sq ft is the largest retail space owned by any club in Europe.

And that’s not all you have to look forward to when visiting the stadium. Throughout the ground are a series of ‘feature walls’ celebrating the club’s past, its fanbase, and the local area, all of which can be accessed via the concourse, which allows fans to move freely about the stadium. The new ground is built on the site of the old White Hart Lane, too, meaning fans can even stand over the penalty spot where so many Spurs legends have stood over the years.

With its world-class facilities and exciting new attractions, the new Spurs stadium represents the pinnacle of club football’s most innovative, modern and luxurious matchday experiences. 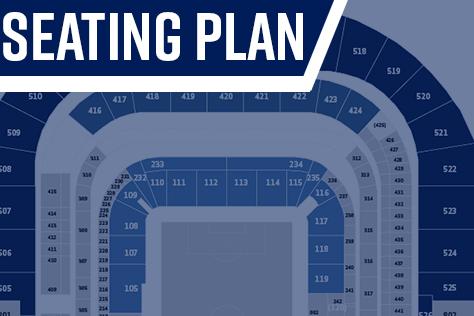 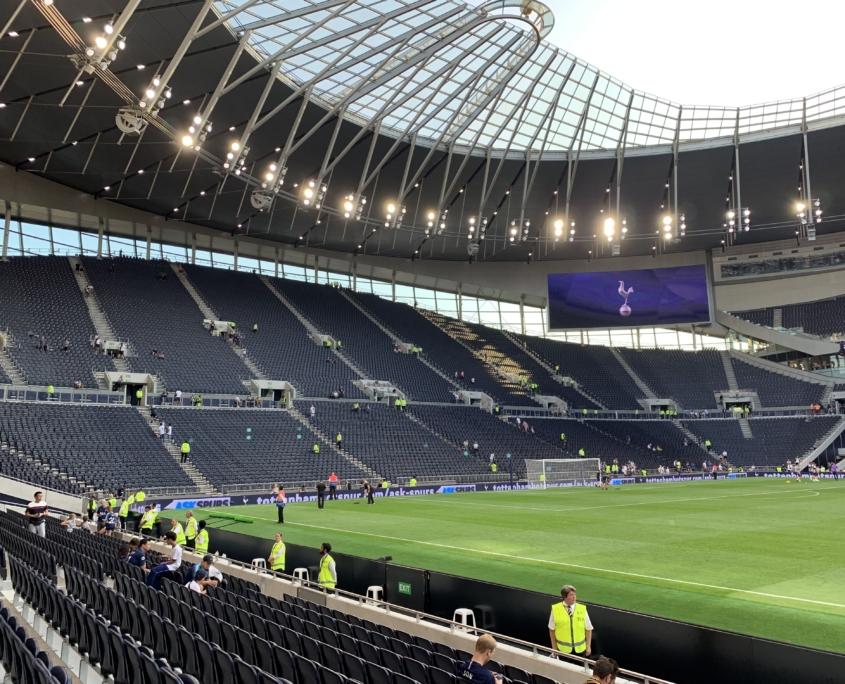 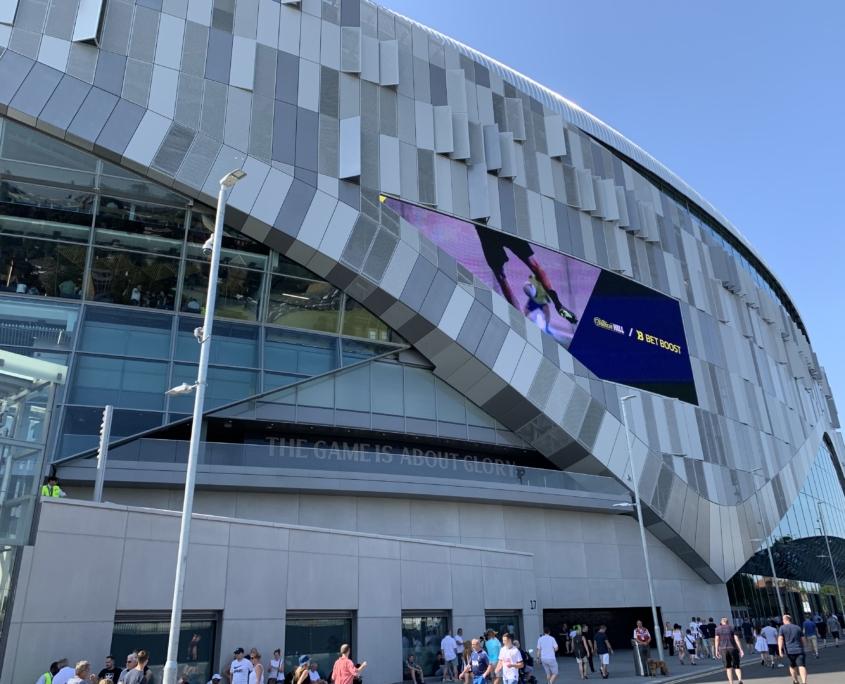 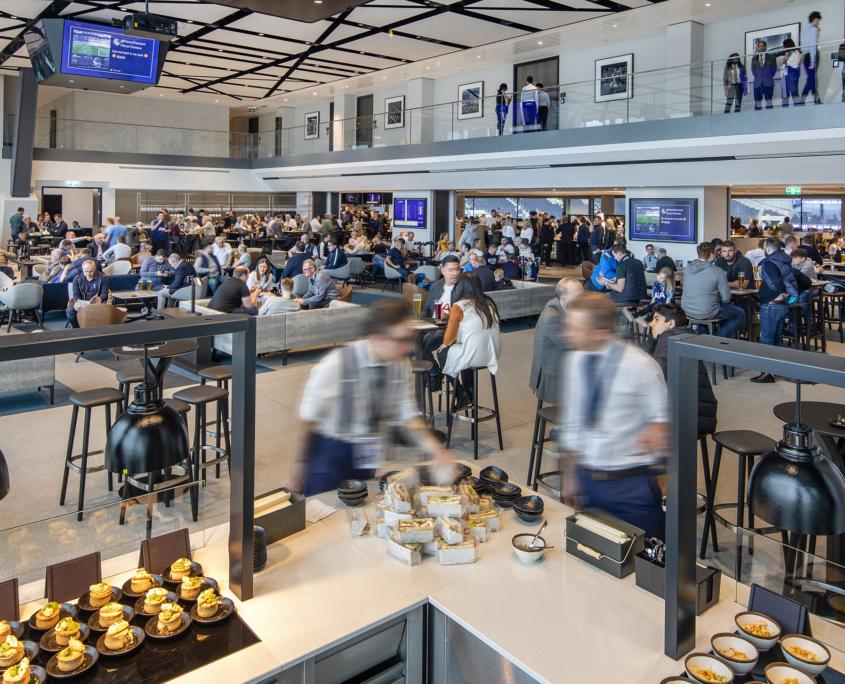 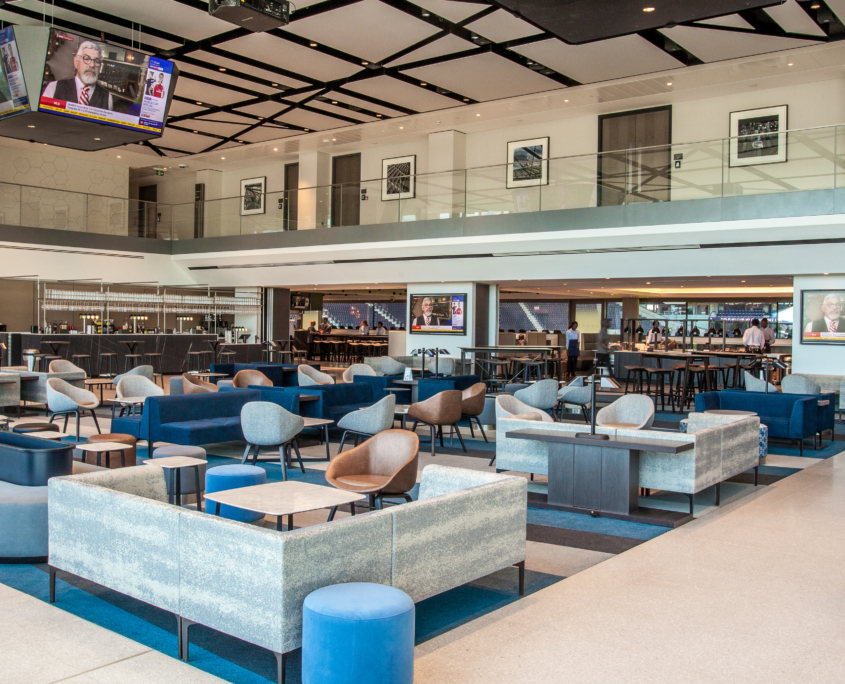 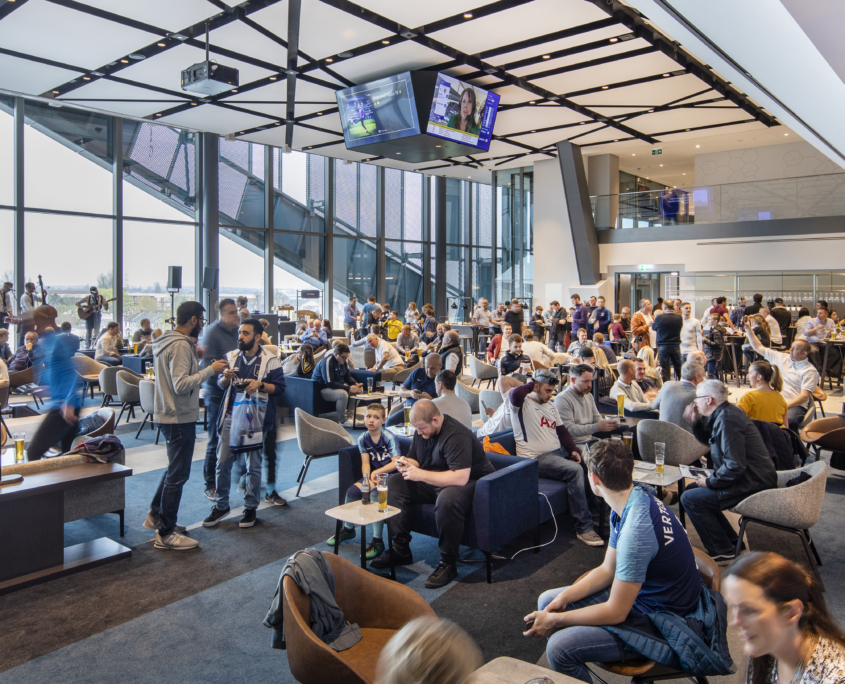 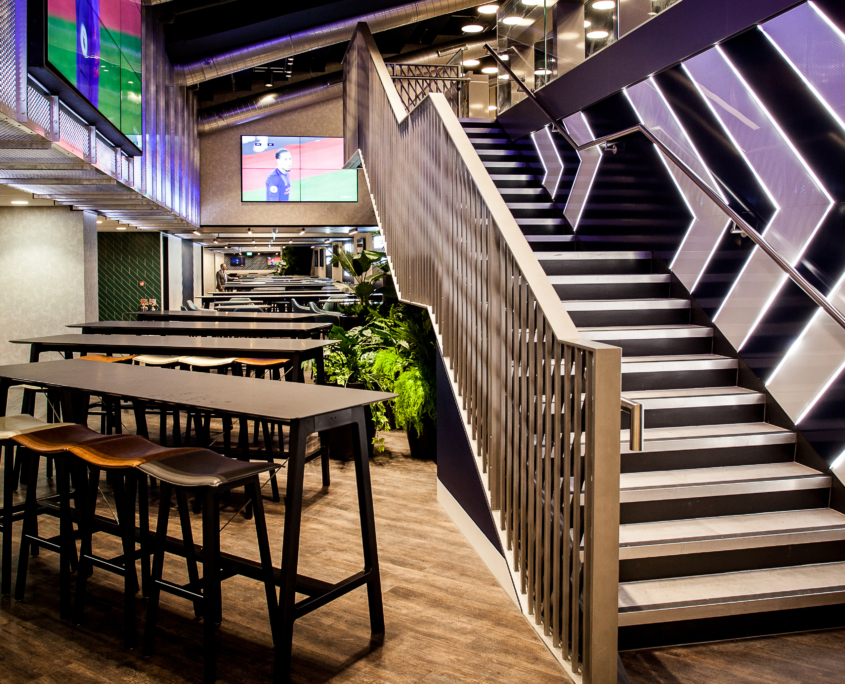 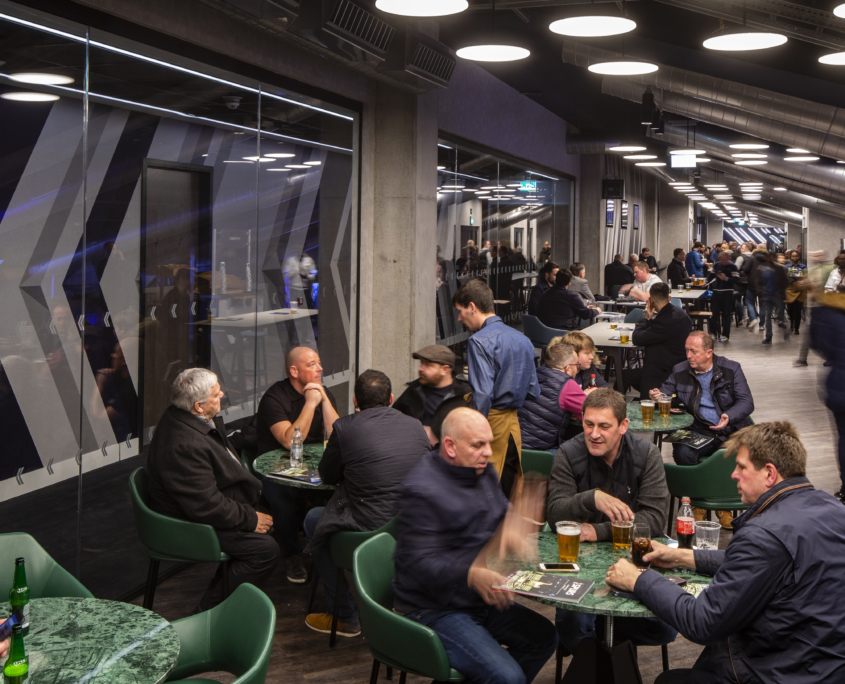 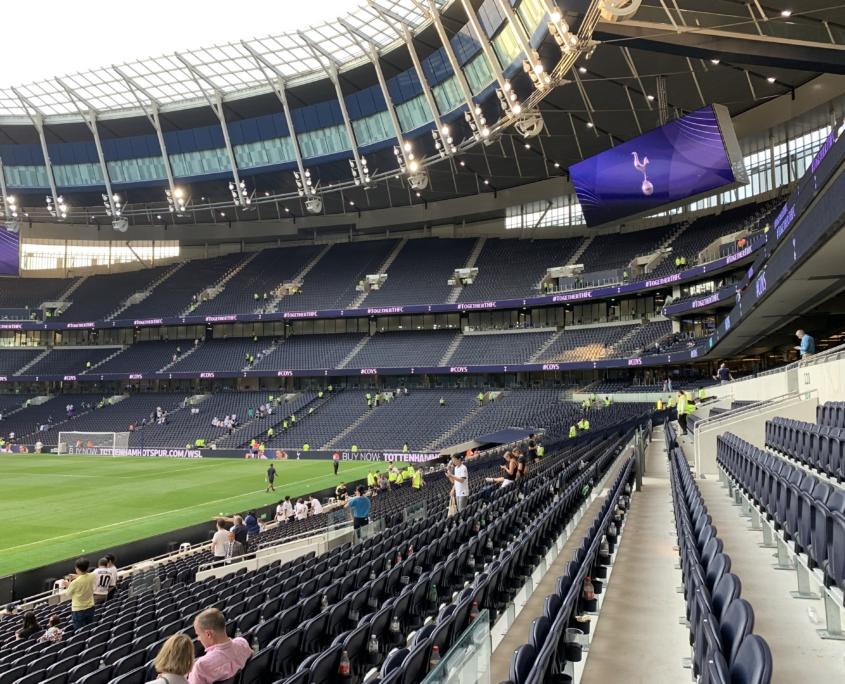 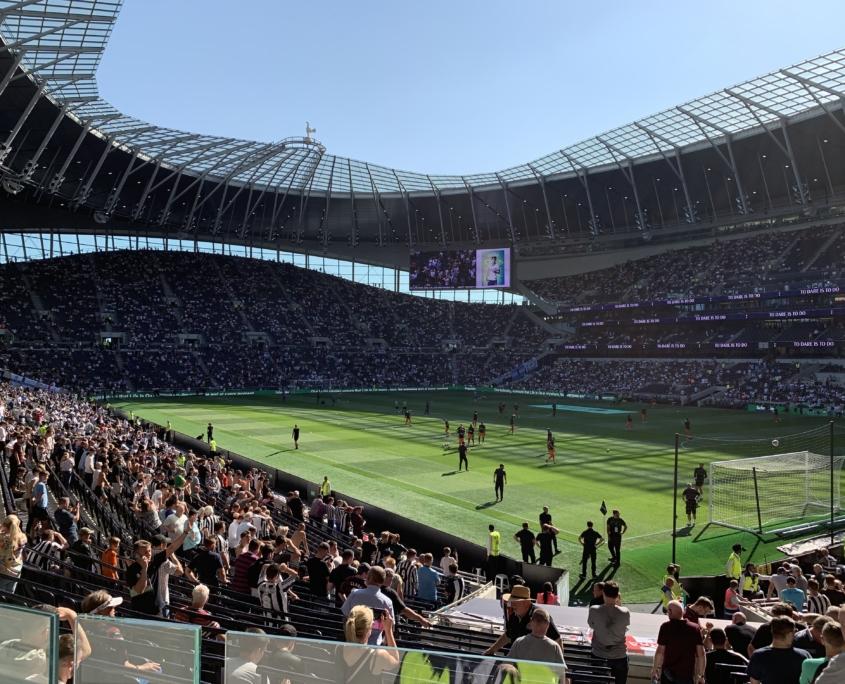 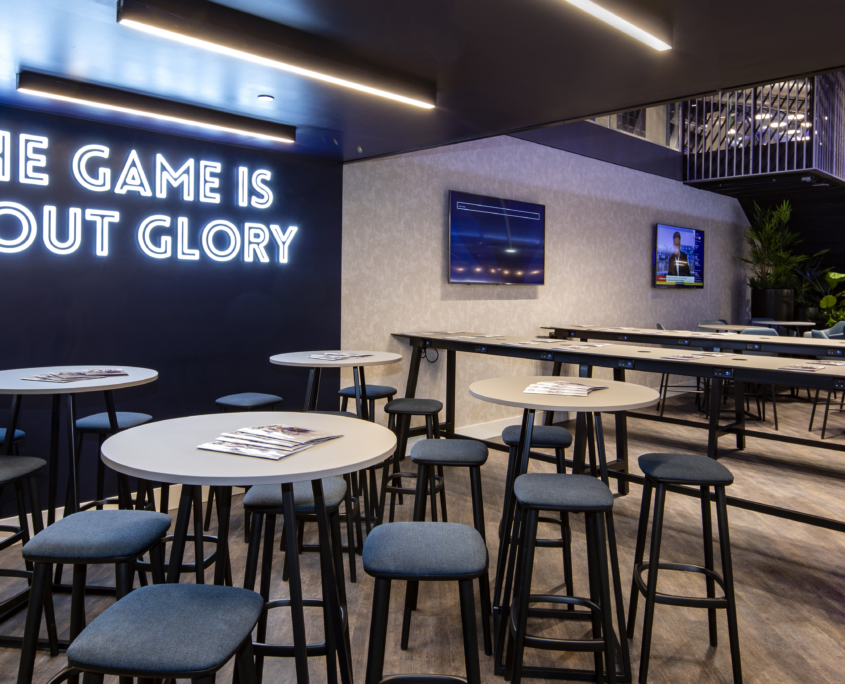 The Tottenham Hotspur Stadium has been carefully designed to give fans the ultimate matchday experience, with more comfortable seating and uninterrupted views of the pitch for every fan in the ground.

Distances from the front row to the touchline range from just 4.9 metres to 7.9 metres, while the angle of the stands is set at up to 35 degrees, making for a more intimate feel and really allowing you to connect to the play.

The stadium bowl has been built with a view to optimise the acoustics within the ground, allowing the Club to maintain its tradition of having one of the most atmospheric homes in British sport. In addition to this the impressive 17,500 single-tier South Stand, the largest in the UK, is more than 34 metres in height and will provide a ‘wall of sound’ whenever the players take to the pitch.

The Spurs Stadium numerous food offerings aim to celebrate the local vibe and culture. With options ranging from fan-favourite signature pies to vibrant street-food, there is something for every visitor to enjoy.

Touchline Grills and Tap Inns are located throughout the venue, serving classic tastes and other delicious dishes, while the Market Place features a range of options, including:

As well as food, the Tap Inns and Touchline Grills situated in every stand will be serving the Club’s official beer partner, Heineken, along with its range of drinks which include Amstel, Strongbow and Old Mout Cider and craft beer from Beavertown.

Much to the amazement of many a fan, draught beer is poured using a bottom-up ‘fast pour’ system for improved hygiene, while there is also a comprehensive range of soft drinks, including healthy smoothies, fruit and vegetable juices, available within the bars and at the Touchline Grills.

Bars located in the stadium include:

The Goal Line Bar (South Stand, Level 1) – at 65 metres, this is the longest bar in Europe.

The Shelf (East Stand, Level 1) – made from bricks salvaged from the old East Stand of White Hart Lane.

The Dispensary (West Stand, Level 5) – takes its name and design from the old Tottenham & Edmonton Dispensary on the High Road.

Microbrewery and Beavertown Tottenham Taproom (South East Corner, Level 1) – serving the Tottenham-based brewery’s range of craft beers, Beavertown will operate a microbrewery within this area – a world-first for any football stadium.

Make a day of it

Why let the final whistle signal the end of your day? At the new Tottenham Hotspur stadium, all bars and food outlets will remain open for up to two hours after the game, while a dedicated stage will play host to a programme of post-match entertainment including live music, Legends Q&As and DJ sets. After the match, the club will also be showing any other Premier League matches that are being broadcast, so you can enjoy a refreshing beer and even more football once the Spurs action is over.

There are also a number of attractions available throughout the year for visitors to take advantage of, including:

Tottenham Hotspur Stadium Tours – allowing you to sit in the home changing room, walk out of the players’ tunnel, go pitchside, see the view from the dugout and much, much more.

Sky Walk – a once in a lifetime experience, this adrenaline-filled attraction will see you scale the Tottenham Hotspur Stadium and step on the glass walkway 40 metres above the pitch. But how do you get down? Simple strap in and abseil down to the pitch from the stadium roof!

The Tottenham Hotspur Archive – the club’s vast collection of artefacts and past records, telling the story of its founding, history and its link to the local area, can be seen here.

The Club Museum – based alongside The Tottenham Hotspur Archive within Warmington House, the Museum is designed to tell the Club’s history, display Club artefacts and encourage the visitor to explore all aspects of the Club and its home in Tottenham.

The Gallery – the Club has allocated a space on the Level 1 Concourse in the West Stand to showcase work by four local artists, whose brief was ‘Passionate About Tottenham’. Each display showcases a different part of Tottenham Hotspur, changing annually so as many artists as possible can be given the opportunity to showcase their work.

No products found which match your selection.