Home I The Team I First Team Squad I 11. Bryan Gil 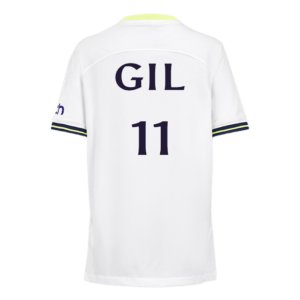 Bryan Gil is a Spanish forward who stands at 5ft 7in (1.75m), who currently plays for Premier League club Tottenham Hotspur. He signed for the club from Sevilla in August 2021 in a part exchange deal including now ex-Spurs forward Erik Lamela with Spurs paying a reported £21.6m (€30m).

Gil’s career began at Sevilla in 2012, going straight into the club’s youth set-up. He made his senior debut for the reserve team in the 2018/19 season on 26th August 2018 in a 1-0 home Segunda Division B (Spanish Third Tier) against UD Ibiza where he made the starting line-up.

His La Liga debut came half-way through the 2018/19 on 6th January 2019 when he came off the bench as a late substitute in a 1-1 draw with Atletico Madrid.

Incredibly, the Spanish forward also broke a record playing for Sevilla in April 2019, where he scored in a 5-0 win against Rayo Vallecano at the Ramon Sanchez Pizjuan Stadium (Sevilla’s Home Ground). In doing so he became the first senior player born in the 21st century to score in La Liga’s history.

Sevilla finished 6th in LaLiga that season with Gil making 11 league appearances, scoring a goal and providing an assist.

He made 7 appearances for Sevilla the next season (2019/20), scoring his first ever European goal in a 2-0 win against Azerbaijan top flight side Qarabag on Friday 29th November 2019.

He then joined fellow LaLiga side Leganes on loan for the rest of the season in January 2020, making 12 appearances and scoring his only goal for the club by way of a last minute equaliser in a draw against Real Madrid on the final day of the season.

Leganes unfortunately got relegated that season in 18th place with 33 points after 38 matches.

For the 2020/21 season he joined another fellow LaLiga side, this time with Eibar in October 2020. He was a regular starter for Los Armeros, making 28 appearances, scoring 4 goals and providing 3 assists for his teammates.

Unfortunately, Gil was part of a team who got relegated once again, finishing bottom of the league in 20th with 30 points after 38 matches.

The Spanish forward did impress out on loan at Leganes and at Eibar in particular. This earned him a transfer to Tottenham Hotspur on 26th July 2021.

He made 20 appearances in all competitions for Tottenham until he joined Spanish giants Valencia on loan for the remainder of the season in January 2022.

At Valencia, he made 17 appearances in all competitions, providing an assist for his teammates. Los Che finished 9th in LaLiga that season (2021/22), with 48 points after 38 matches.

So far this season (2022/23), he has made 6 appearances in all competitions for The Lilywhites.