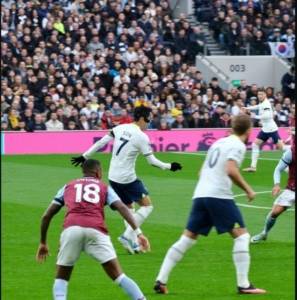 Spurs were unfortunately unable to climb into the top four on their first Premier League fixture of 2023 at the Tottenham Hotspur Stadium, losing 2-0 to Aston Villa. Goals came from Emiliano Buendia and Brazilian international Douglas Luiz.

Ahead of kick-off, tributes were paid to Tottenham legend Maurice Norman and football icon Pele in what was an emotional afternoon in North London.

The first chance of the match fell to Unai Emery’s team through Ashley Young, who saw an effort blocked after receiving the ball from Luiz (3’).

Ollie Watkins then had an opportunity to open the scoring for the Villa, but his effort went wide of the far post (9’).

Tottenham’s first opportunity came just moments later when Matt Doherty had a shot blocked after a great pass into his feet by Bryan Gil (13’).

Harry Kane looked to have scored with a header following an Ivan Perisic cross just before half time, only for the ball to be prevented from going over the line by an impressive goal line clearance by Young (40’).

Son Heung-Min then had a chance to open the scoring for the Lilywhites from inside the box, only for Sweden international Robin Olsen to make the save to deny him (44’).

Antonio Conte’s side went a goal down early on in the second half when Emiliano Buendia found the bottom left corner following a pass into him by Watkins (50’).

Spurs did respond quickly, with Perisic having the chance to restore parity but saw his effort fly just over the crossbar after he was found by ex-Brighton midfielder Yves Bissouma with just over half an hour of the match remaining (57’).

Watkins almost punished the home team for missing these chances twice in quick succession. His first was well blocked before an effort from outside of the penalty area was also well blocked by the Lilywhites defence (64’).

Harry Kane then had a shot go wide after an accurate pass into his feet by Son (68’).

Tottenham were then punished for not taking these chances when Douglas Luiz doubled the Villans’ lead with less than twenty minutes remaining following a fantastic pass from John McGinn (73’).

The home team came agonisingly close to halving the deficit with less than five minutes remaining when Heung-Min Son had a powerful effort on goal blocked well by the Villa defence (87’).

The final whistle went soon after with it not being how Spurs will have looked to start 2023. Spurs did dominate possession (59%) and still have a good chance of finding themselves in the top four come the end of the season with only a point separating themselves and 4th place Manchester United (although the Red Devils have a game in hand).

Tottenham will have a chance to climb back into the top four with a victory against Crystal Palace on Wednesday.