Home I Latest Spurs News I How are Spurs players doing at the 2022 World Cup so far?

How are Spurs players doing at the 2022 World Cup so far? 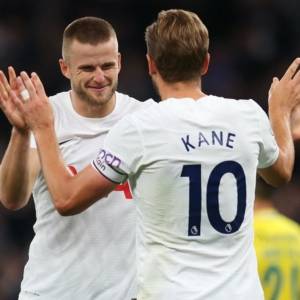 12 Tottenham Hotspur players were called for the highly anticipated 2022 World Cup in Qatar. At the quarter final stage of the tournament, 6 Spurs players remain in with the chance of lifting the coveted World Cup trophy on Sunday 18th December 2022.

England opened the group stages with an emphatic 6-2 win against Iran, before a 0-0 draw with the United States in the second match.

They then went on to beat Wales in emphatic fashion, winning 3-0.

Harry Kane then scored his first goal of the tournament in the round of 16 tie with Senegal, where England were 3-0 winners.

France opened their World Cup campaign with a comfortable and emphatic 4-1 win against Australia. They then beat Denmark 2-1, before losing 1-0 against Tunisia.

It was back to expectation in the Round of 16, beating Poland 3-1.

They will face England in the Quarter Final, where Lloris will be looking to claim his first clean sheet of the tournament.

Denmark played out a goalless draw against Tunisia, before being narrowly beaten 2-1 by France. They then lost their final group stage game 1-0 against Australia courtesy of a Mathew Leckie goal.

Unfortunately, Wales were knocked out in the group stages of the competition. They drew their first group stage match 1-1 with the United States, before losing 2-0 to Iran. England got the better of Rob Page’s men in the final group match, beating them 3-0.

Brazil began with a 2-0 win against Serbia, which saw Richarlison score two goals.

Brazil then beat Switzerland 1-0, before losing against Cameroon. The first two results guaranteed qualification for Round of 16 for Tite’s side.

Brazil turned on the style against South Korea, beating them 4-1 with Richarlison once again on the scoresheet.

Croatia drew with Morocco in their first group stage match, before beating Canada 4-1. A draw with Belgium a few days later saw them successfully qualify for the round of 16.

Japan were beaten on penalties in the round of 16, where Ivan Perisic scored to beat Davor Suker’s record for goals in a major tournament for Croatia.

Bentancur and Uruguay unfortunately got knocked out in the group stages. They drew their first match 0-0 with South Korea before losing 2-0 against Portugal.

Despite beating Ghana 2-0 in their final group match, they were knocked out due to results elsewhere.

South Korea were surprise packages in this world cup, getting to the round of 16. They drew with Uruguay before beating Ghana 3-2 and also Portugal (2-1).

Their run in the competition ended at the hands of Brazil who beat them 4-1.

Argentina surprisingly lost their first match 2-1 against Saudi Arabia before beating Argentina and Poland 2-0 to successfully qualify for the round of 16.

They were drawn against Australia who they comfortably beat 2-1. They will face The Netherlands in the Quarter Final.

Sarr and Senegal lost 2-0 against The Netherlands in their opening match before beating hosts Qatar 3-1 and then Ecuador (2-1).

Their run in the tournament came to an end in the Round of 16, losing 3-0 to England.