Spurs bow out of Carabao Cup against Nottingham Forest 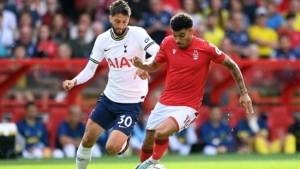 Tottenham were knocked out of the Carabao Cup by Nottingham Forest at the City Ground on Wednesday evening.

Antonio Conte’s team were strong in the early stages of the match, with debutant Fraser Forster making two outstanding saves to deny Forest an opening goal.

Ivan Perisic had Spurs’ best chance of the first half, but Wayne Hennessey was there to make the save.

Unfortunately, Steve Cooper’s Reds managed to score two quickfire second half goals, with Atletico Madrid loanee Renan Lodi curling a shot into the top right corner (50’) before Jesse Lingard was able to score a header from close range after receiving a ball from Sam Surridge (57’).

Spurs have been very resilient in recent times and would certainly not give up, especially after recently beating Bournemouth after being 2 goals down.

Chances did come for Spurs when a corner caused mayhem in the Notts Forest penalty area with numerous scrambled clearances leading to Joe Worrall clearing the ball off the line. This was a positive sign for the Lilywhites, who knew that there was still a way back into this game.

A comeback was made more likely midway through the second half when Forest midfielder Orel Mangala got sent off after fouling the returning Richarlison.

Spurs then started to have chances on a regular basis. Richarlison was the first to test his luck with twenty minutes left but saw his effort from outside the box saved well. Just moments later, ex-Forest loanee Djed Spence had a header saved from close range.

Rodrigo Bentancur was one of the players trying the lead a Tottenham comeback. Following an initial effort that was saved, he had another attempt that flew narrowly wide of the near post.

Summer signing Yves Bissouma had the final chance for the visitors. His header from the centre of the box was saved once again by Hennessey.

Over the course of the match, the Lilywhites dominated possession (59%) compared to 41% for Forest.

Conte’s team did have plenty of efforts on goal, having 9 shots compared to 14 for the hosts. Spurs had 2 shots on target, compared to 8 for Forest.

Following this defeat, the focus will have to go back to the Premier League as they look to continue their mission to secure European football come the end of the season.

Tottenham will still have a chance for silverware with the FA Cup, which they enter in January 2023. The Premier League is also an open race, and Conte’s team will want to close the gap between themselves and the top two in the upcoming Premier League games.

Tottenham will want to come back from this disappointment in the best possible way, and their first opportunity to do so comes when they face Leeds United on 12th November at the Tottenham Hotspur Stadium.