Home I The Team I First Team Squad I 20. Fraser Forster 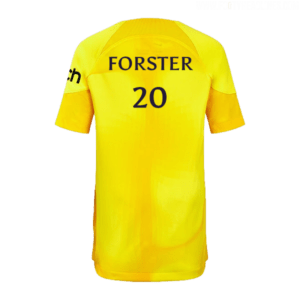 Fraser Forster, standing at 6ft 7in is an experienced goalkeeper who has a 16 year career to date. The 37-year-old signed for Tottenham Hotspur in June 2022.

Forster began his career at Newcastle United, signing his first professional contract at the Magpies in 2005. He was sent on loan to Stockport County and Bristol Rovers before he joined then League One side Norwich City for his third loan spell in 2009.

His debut for the Canaries came in August 2009 which was an impressive performance for Paul Lambert’s team keeping a clean sheet; Forster eventually saw his initial one month loan extended until the end of the season in November 2009.

Forster helped to guide Norwich to promotion from League One and into England’s second tier, the Championship in April 2010 following a victory over Charlton Athletic. It was emphatic from Norwich in the end, who won the league title and ending the season on 95 points – 9 ahead of Leeds United in 2nd. In his 38 League One appearances for Lambert’s Canaries Forster kept 19 clean sheets. He was awarded the players’ player of the season award for the 2009/10 season.

Fraser Forster went on to join Scottish heavyweights Celtic in August 2010, joining on loan for the season. His debut for the club came in a 1-0 away victory against Motherwell in the same month. Forster made 36 Premiership appearances that season, keeping 21 clean sheets. Celtic finished 2nd that season, losing out on the title to arch rivals Rangers.

The England international joined Celtic on loan again the following season (2011/12) helping the team to a league title before making his stay in Glasgow permanent in June 2012, ahead of the 2012/13 season.

Forster signed for Southampton on a permanent deal in August 2014. His Premier League debut came at Anfield, where Ronald Koeman’s Saints narrowly lost 2-1 against Liverpool. A league match at St. Mary’s saw Forster keep his first clean sheet for the club in a 0-0 draw.

The 2014/15 was a successful one for Southampton and Forster, finishing 7th in the Premier League on 60 points, and only 2 adrift of a European spot.

The highest Southampton finished in Forster’s time at the club came in the 2015/16 season where they finished in 6th place, qualifying for European Football. They were eliminated in 3rd in the 2016/17 Europa League group stage.

Forster signed for Spurs in June 2022 and made his debut in a Carabao Cup tie against Nottingham Forest at the City Ground.