Spectacular Spurs come from behind to beat Leeds 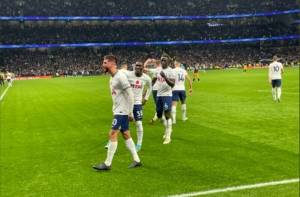 Spurs responded to their previous defeat against title challengers Liverpool in style on Saturday afternoon, as two late goals from Rodrigo Bentancur sealed a spectacular win for Antonio Conte’s team.

Spurs fell behind to a Crysencio Summerville goal (10’), before Harry Kane scored his 12th goal of the season to restore parity (25’).

The Lilywhites almost took the lead just a couple of minutes later through the returning Dejan Kulusevski, whose shot from outside of the penalty area forced a save from Illan Meslier.

Richarlison then had an effort blocked just after the half hour mark.

Spanish striker Rodrigo restored Leeds’ advantage with a volley from close range just a few minutes before the half time break (43’).

An outstanding goal from Wales international Ben Davies levelled the score just a few minutes into the second half when Kane’s effort was blocked, with the ball eventually falling to the defender who found the back of the net (51’).

Unfortunately, Jesse Marsch’s team were in the lead once again when Rodrigo found the bottom right corner of Hugo Lloris’ net with a calm, low finish following a counter attack (76’).

The Lilywhites would have to show their resilience and determination to come from behind again, just like they did against Bournemouth a few weeks earlier.

Bentancur then scored his third and fourth Premier League goals of the season in very quick succession to turn defeat into victory. His first goal flew into the bottom right corner from outside the box when Matt Doherty’s cross eventually found the Uruguayan who made no mistake (81’). The second goal, which turned out to be the winner, came when Kulusevski’s powerful run ended with a pass across the box which was calmly placed into the back of the net by the midfielder (83’).

Kane came close to extending Spurs’ lead further just a couple of minutes later, but his shot was blocked well by the visitors’ defence.

Tottenham’s efforts to see out the match were aided when Tyler Adams was sent off for a second yellow card after a challenge on summer signing Yves Bissouma.

This win is a very positive result ahead of the World Cup break, and they will be looking to come back after the World Cup looking to build a run of results as they look to qualify for European football come the end of the season.

Their first match following the break is away against Brentford, before hosting Aston Villa in their first home match of 2023 at the Tottenham Hotspur Stadium which is available to book now.

Possession throughout the match was very even with Tottenham having the larger share (55%) compared to 45% for Leeds.

Antonio Conte’s team also produced more efforts on goal with 14 compared to 12 for the visitors.

The victory meant that Spurs remained in 4th place, but were now on 29 points – only 1 behind Newcastle and they were also now within 3 points of Manchester City in 2nd.