Home I The Team I First Team Squad I 6. Davinson Sanchez 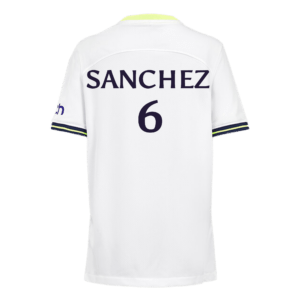 Davinson Sanchez is a Colombian central defender who stands at 6ft 2in (1.87m), who currently plays for Premier League club Tottenham Hotspur. He signed for the club from Dutch giants Ajax in August 2017 for a reported fee in the region on £42m.

He began his career in the youth academy at America de Cali in his native Colombia before signing for one of the biggest clubs in the country, Atletico Nacional. He made his senior debut for the club on 27th October 2013 in a top flight league match against Boyaca Chico.

He soon became a regular starter for the club and just under three years later he scored his first goal for the club in a Copa Libertadores (South American version of the Champions League) against Peruvian side Sporting Cristal in an emphatic 3-0 win.

Sanchez and Nacional went on to win the Copa Libertadores title in a 2-1 win against Ecuadorian club Independiente del Valle over the course of the two legged final on 20th July and 27th July 2016.

He eventually went on to sign for Ajax in June 2016 for a reported fee of €5m (£4.3m). He made his debut for the club in a 2-2 Eredivisie (Dutch Top Flight) draw against Roda JC on August 2016. His first goal came quickly, scoring just a month later in a league match against PEC Zwolle.

By the end of that season, Davinson Sanchez had won the prestigious Rinus Michels’ Player of the Year Award. Sanchez and Ajax finished 2nd after 34 matches with 81 points, losing out on the title to arch rivals Feyenoord Rotterdam by 1 point.

He made his debut for Spurs on 27th August 2017 as a late substitute in a 1-1 draw against Burnley at White Hart Lane.

His form meant that Sanchez soon became one of the first names on the team sheet, and went on to make 31 appearances in all competitions for Spurs over the course of the 2017/18 season. Pochettino’s side finished 3rd in the Premier League that season with 77 points to their name, after all 38 games had been played.

In the 2018/19 campaign that saw Spurs finish 4th in the Premier League, Sanchez was a significant part of the Spurs side that reached the UEFA Champions League Final that saw them unfortunately lose the final to Liverpool.

Over the course of the 2021/22 season, he made 32 appearances in all competitions. 23 of these were in the Premier League which saw Spurs finish 4th with 71 points. This saw them qualify for European Football.

Over the course of his 5 year spell at the club so far, he has made 193 appearances in all competitions for the Lilywhites, scoring 5 goals and 1 assist.

He has 51 caps for the Colombian national team, scoring a goal.