Home I The Team I First Team Squad I 8. Harry Winks 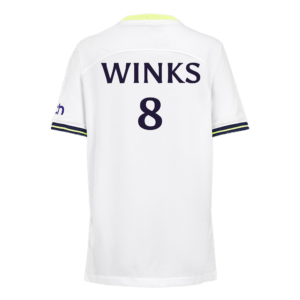 Harry Winks has been a Spur since his early days in the academy. He plays in central midfield (CM) and his impressive performances in the youth sides have afforded him recognition within and around the 1st team squad.

Harry had been a part of the youth Academy since 2012. During his 2013-14 and 2014-15 campaigns, he was appearing on the bench for a few first team matches whilst playing in the youth Premier League seasons at the same time. He made his debut for the professional side in November 2014, where he was called upon as a substitute to beat Partizan Belgrade in a Europa League clash. The same sort of dynamic continued into his 2015-16 season where he was able to flicker between appearing for both the 1st team and the Spurs U21 squad. Harry’s year of success, so to speak, came in the 2016-17 campaign. He made his first Premier League appearance in August 2016 before appearing for the Spurs first-team 33 times over the course of the year. Unfortunately, he picked up an ankle injury mid-April and had to draw a conclusion to a glistening season, when he proved he was more than worthy of a first-team spot.

Despite the ankle injury keeping out of pre-season, Winks returned to the Spurs first team during the 2018/19 season in fine form. In January 2019 he scored a last minute winner against Fulham in the Premier League.

Internationally, Harry Winks has represented England at the U17, U18, U19, U20 and U21 levels. He received his first senior side appearance during a World Cup qualifier in 2017 and after a number of promising performances at the start of the 2018/19, cemented his place in Gareth Southgate’s squad.