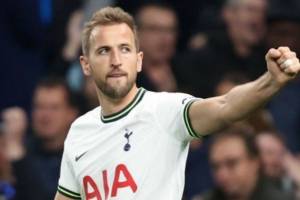 Antonio Conte’s Spurs came away 4-0 winners against Crystal Palace on Wednesday night, narrowing the gap between themselves and the top four.

It was the Lilywhites who were presented with the first opportunity to open the scoring in the early stages, only for Bryan Gil’s shot to be well blocked by the Eagles defence following a pass into his feet from Son Heung-Min (4’).

Gil then forced a save from Vicente Guaita before Pierre-Emile Hojbjerg had a powerful effort well blocked (13’).

Patrick Vieira’s Eagles had their first opportunities of the match a few moments later, when Cheick Doucoure had an effort blocked, with Michael Olise then seeing his own effort on goal fly over Hugo Lloris’ crossbar (23’).

Harry Kane was looking for a goal to mark his 300th appearance for Spurs, which almost came when his header went narrowly wide of the far post after a cross into the box from Matt Doherty (24’).

After a Joachim Andersen effort that was well saved by Lloris, it was Spurs who had the final chance of the first half when Kane had a shot well blocked by a resilient Crystal Palace defence (44’).

It did not take long for Kane to make an impact in the second half. He opened the scoring with a fabulous header that found the bottom right corner after Ivan Perisic found the forward with an accurate cross (48’).

Palace did not have any time to settle after falling behind when Kane got his second goal to double Spurs’ lead just moments later. His effort found the net after receiving the ball from Gil (53’).

Kane’s second goal was his 264th for club, meaning that he is now only two goals behind the all time goalscoring record for Spurs held by the legendary Jimmy Greaves.

Son soon had an opportunity to put his team’s victory beyond doubt, but he was unfortunate to see his effort saved well by Guaita (67’).

It was 3-0 just seconds later when Matt Doherty was in the right place in the right time to place a powerful close range effort into the bottom left corner to make it certain that Spurs would be leaving Selhurst Park with all three points (68’).

Son got the fourth and final goal of the match after Kane found his fellow forward with a ball over the top of the Palace defence. The South Korean’s effort found the back of the net from close range (72’).

It was a fantastic performance from the Lilywhites who had blown Palace away in the second half to claim a deserved and vital three points in a bid to earn European Football come the end of the season.

Lloris did have to make numerous saves to give his team the platform to earn this victory.

Spurs dominated possession with 53%, with 6 of their 14 shots finding the target with Conte’s team more clinical in front of goal than their opponents.