Spurs will travel to Molineux on Saturday to face Wolves in the Premier League in high spirits after their victory over West Ham in the Carabao Cup.

Although they lost to Man City in their last league game, the signs are there that Spurs could put a good run of form together before the November international break. Heung-min Son finally scored for Spurs, after going twenty games without a goal, and with Christian Eriksen and Dele Alli back from injury, Spurs have a number of attacking options to choose from.

Spurs are only five points away from the Premier League leaders Man City but will know that they face a tough test against a Wolves side that have massively impressed on their return to the top flight.

Nuno Espirito Santo’s team took the Premier League by storm with their positive style of football but have stumbled slightly in the last few weeks, losing their last two Premier League games.

Those defeats to Watford and Brighton have highlighted a problem for Wolves, which is scoring goals. They have scored nine in ten games so far this year and have not scored in the first half since Ruben Neves netted against Everton. Whereas they were getting results in low-scoring games, the manager and players will know that they need to find more attacking potency in the coming weeks.

Despite that, Wolves were unlucky to lose against Brighton and will be eager to get back to winning ways in front of their home fans after losing their last match at Molineux to Watford.

"We are never satisfied, we always try to improve, win every game and try to take that last step that everybody is talking about."

As mentioned, Christian Eriksen and Dele Alli are back to full fitness after recovering from injuries and so will be available for the Wolves match.

However Eric Dier will remain out with a thigh injury and Victor Wanyama picked up a knock against West Ham so will be unavailable against Wolves.

Danny Rose and Jan Vertonghen will also continue their absence for Spurs.

🔹Eric Dier and Danny Rose are expected to be out of selection until at least the next international break.

Wolves have largely stuck with the same starting eleven all season and only made their first changes against Brighton. The back five of Matt Doherty, Ryan Bennett, Conor Coady, Wily Boly and Jonny Otto have been in good form and all are expected to start on Saturday.

Portuguese midfield duo Joao Moutinho and Ruben Neves will retain their places as will striker Raul Jimenez. The only changes Nuno will make will more than likely be to his wide attacking players. Two of Diogo Jota, Adama Traore, Ivan Cavaleiro and Helder Costa will get the nod on Saturday. With Jota a possible doubt with injury, Cavaleiro could come into the side for his first start in the Premier League. 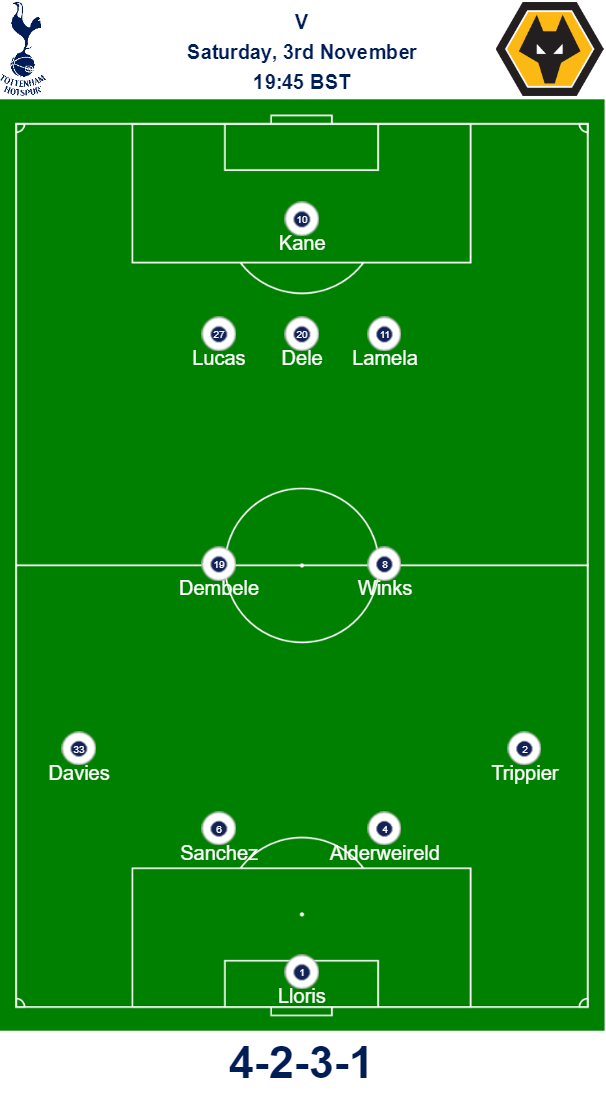 Many changes will be made to the Spurs side that defeated West Ham in the Carabao Cup. Captain Hugo Lloris will come back in for Paulo Gazzaniga, who seems to have established himself as second choice at the club.

Kieran Trippier, Toby Alderweireld and Ben Davies will return and Davinson Sanchez may be tasked with his third game in six days. Despite Juan Foyth’s excellent performance midweek it is unlikely Pochettino will put him straight in the side against Wolves but the Argentine may warrant a place on the bench.

Harry Winks may keep his spot in the starting eleven because of injuries to Eric Dier and Victor Wanyama meanwhile Mousa Dembele will almost certainly return to the Spurs team. Then Pochettino has a bit of a selection headache as to which three players will play behind Harry Kane.

Dele Alli only played 64 minutes midweek but Pochettino may not want to rush him back into the side. But because Christian Eriksen played the majority of the match against West Ham after returning from injury, it may mean that Alli is picked ahead of him versus Wolves.

After missing out midweek, Lucas Moura and Erik Lamela should return to the team and there is a possibility also that Moussa Sissoko could start on the right hand side after impressing against Man City. Similarly, Heung-min Son will be pushing for a start after his two-goal heroics in his last game for Spurs.

“Our fans are so frustrated but you are the first that wants to win, the players, the staff, everyone. When you’re close, you need to try to translate that it’s all under control and try to create a good feeling, trying to help that hope that one day we can win. Of course sometimes the period that you spend, if you don’t achieve all that you want or expect, it’s true that it’s difficult to keep motivated with the right energy to in the end achieve all that you want.

I think the period today at the club, at Tottenham, is so exciting. Of course it looks when you look backwards I think it’s like one life, like we are at Tottenham for 20 or 30 years, because it was so tough, the moments, and so intensive, the moments we shared together. But I think we’re in the middle of the [journey] and I don’t believe that it’s the end of something.

That’s the difference when people talk for different clubs. When you talk about some clubs or others you need to see where they are, how they are, who they are. But when you assess Tottenham, they are in the middle of the journey, in the middle to arrive in the harbour. And you need time. And the time sometimes depends on the boat, or on many things – whether you can improve your boat during the journey. People can talk a lot and create a lot of history and theories about Tottenham but the most important is the reality.

The reality is we are very close to finishing the new stadium, we’re very close to creating, in facilities, one of the best clubs in the world. Of course all have different costs to pay, and sometimes to win titles today is difficult for different reasons that you and our fans know very well. But sometimes the patience is shorter, it’s not too big, and the frustration, like for us, when you don’t win… You’re so close but you don’t win. But for me it’s so exciting to be here at Tottenham, helping the club to achieve the last level.”

Mike Dean will referee Spurs for the first time in the Premier League this season. He was in charge of Wolves’ defeat to Leicester and most recently officiated Watford’s match against Huddersfield. In eight Premier League games he has given thirty-five yellow cards, three red cards and one penalty.

Despite Wolves not picking up points in their last two encounters, they have still performed well and Spurs will be in for a tough test. Key players managed to get a much needed rest in the week and so should be ready to go in another competitive away game. If Spurs are anything less than their best then Wolves will punish them.

Our prediction is Wolves 1-2 Spurs