Home I The Team I First Team Squad I 1. Hugo Lloris 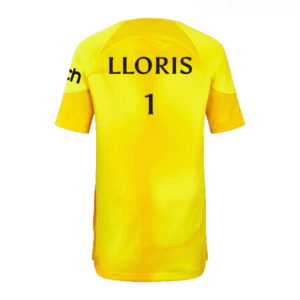 Hugo Lloris is captain of the French national team, lifting the World Cup with his nation in 2018 and a goalkeeper for Spurs. Standing at 6 ft. 2, Lloris poses a formidable threat in one-on-one situations and is known for his uncanny command of the box.

Lloris began his senior career in his hometown of Nice in 2005, making 72 appearances in three seasons for OGC Nice before moving to Ligue 1 giants Olympique Lyonnais. During his second season at Lyon, Hugo Lloris was noted for his exceptional performances in the UEFA Champions League, helping the club reach the semi-final stage for the first time in the clubs history.

Lloris joined Spurs in August 2012 and and made his debut against Lazio in the Europa League, keeping a clean sheet in the process. After initally being kept out of the Spurs side by Brad Friedel, he made his Premier League debut against Aston Villa in October 2012 and went on to etablish himself as Spurs’ number one. In total he made 33 appearances in his first season at the club including 27 starts in the Premier League.

Lloris then had an outstanding 2013-14 campaign for Spurs and appeared in all but one Premier League match for Spurs. The next season he was named vice-captain of the club and skippered Spurs on many occasions during Mauricio Pochettino’s first season in charge.

In 2015-16 Lloris was named Spurs captain permanently and made 46 appearances for the club in all competitions. The following year, Lloris narrowly avoided winning the Premier League Golden Glove award and started all of Spurs’ Champions League games as they returned to the competition for the first time under Mauricio Pochettino.

Lloris started 36 of our 38 Premier League games in 2017-18 and put in some impressive performances against Borussia Dortmund and Real Madrid in the Champions League. That year he also made his 250th appearance for Spurs.

In the first knockout round of the Champions League in 2019 against Borussia Dortmund, Lloris produced a man of the match performance to ensure Spurs progressed to the quarter-finals. The match at Signal Iduna Park also marked his 100th clean sheet for the club.

Hugo’s 10th year at Spurs was during the 2021/22 season while leading the team into the Champions League with a personal best 16 clean sheets for the season. Last year Lloris completed the PL season ever-present, playing all 38 games, racking up to 3,420 minutes – alongside Man United’s David de Gea.

In his International career, Hugo Lloris represented France at under-18, under-19 and the under-21 level, eventually making his senior debut against Uruguay in 2008. He captained the French side for the first time in 2010 in a friendly against England and has skippered them ever since.

Lloris made his 100th appearance for his country during the group stage of the 2018 World Cup and lifted the World Cup trophy after France defeated Croatia in the final of the competition.