Sunday marks the final day of the 2017/18 Premier League campaign as Spurs host Leicester City for their final game at Wembley Stadium. It has been a riveting season for the Lilywhites, which culminated last week when they clinched admittance into the Champions League midweek in a 1-0 defeat over Newcastle.

All Spurs need to do to finish third in the league is win, but they can play with a certain degree of freedom with the knowledge that they cannot be budged from top four. Spurs have lacked that style with which they usually play in recent times, however, they will no doubt want to leave Wembley with a bang. Harry Kane is three goals behind Mo Salah in the race for the Premier League Golden Boot – could we see a four-goal stunner? After all, we have seen Kane come alive in the last game of previous seasons before.

After a poor run of form, Leicester trounced Tottenham rivals, Arsenal, three goals to one midweek.

The last time these teams met was back in November, and Leicester beat Spurs two goals to one at the King Power Stadium. The infamous duo that were so threatening for Leicester in their Premier League winning campaign, Jamie Vardy and Riyad Mahrez, punished Spurs – whilst Harry Kane netted once. You can refresh your memory of Spurs v Leicester here.

Check out these Lilywhite bangers against Leicester from games gone by:

It is rumoured that Kieran Trippier is a doubt – meaning that Kyle Walker-Peters might get a rare run in the starting XI.

Harry Winks will not be making a miraculous return for the final game. The manager’s midfield options look scarce and Toby Alderweireld may start in a final farewell ahead of a potential move away from North London in the summer transfer window.

For Leicester, Marc Albrighton will serve a suspension that sees him miss the last game of the season, N’Diddi and Adrian Silva are both doubts due to injury. Keeper Schmeichel is still injured and won’t be making an appearance.

Tottenham Hotspur have moved up to third in the Premier League on 74 points, which is the highest they can finish. Liverpool are fourth on 72 points: It’s in Tottenham’s hands with one game left.

Leicester City are 9th with 47 points. They cannot move down the table, but they can potentially finish 8th if they win and Everton lose or draw. Everton are currently 8th with 49 points. The Foxes have the better goal difference 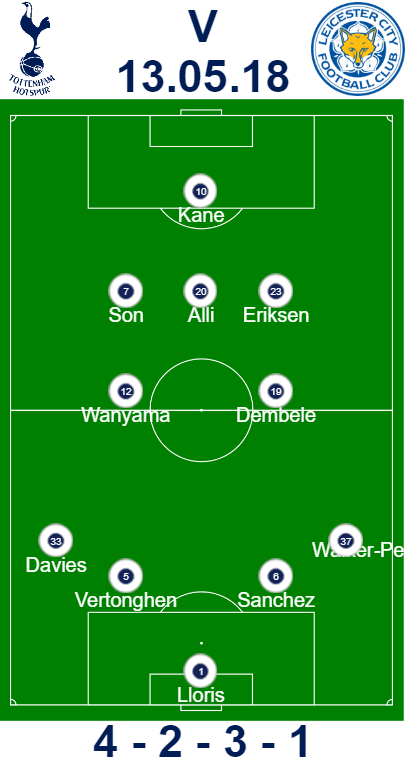 The game will kick off at 3pm on Sunday 13th May. It will not be televised in the UK

Spurs will want to finish their temporary season at Wembley strong and go out with a bang. Because there is no pressure on the result of the match – as it cannot affect their Champions League position – Spurs may play the carefree, free-flowing football that we have this season. Leicester have ended their poor run of form with a win against Arsenal, but an away trip to Wembley is never an easy match. Additionally, they have nothing to play for.

Pochettino praises Wanyama and Sissoko after Newcastle
Scroll to top