Spurs bounced back from their disappointing defeat in the North London derby with a comfortable 3-1 win over Southampton at Wembley on Wednesday. The victory was important for Spurs as both Arsenal and Chelsea failed to win in their Premier League encounters, so Mauricio Pochettino’s side are now third in the table.

Pochettino decided to revert back to a 4-2-3-1 formation after going with a diamond in recent weeks. Harry Winks returned to the midfield whereas Lucas Moura and Heung-min Son played on either wing behind the focal point of Harry Kane. Eighteen year old Oliver Skipp was also on the bench for the first time in a few weeks for Spurs.

Southampton caretaker manager Kelvin Davis made four changes in his one and only match in charge. Matt Targett, Steven Davis, James Ward-Prowse and Manolo Gabbiadini all returned to the Saints side. New manager Ralph Hasenhuttl was also in the Wembley crowd to witness his new side in action before officially taking over managerial duties on Thursday.

Within three minutes it was evident which way the match would go. Kieran Trippier’s header to Heung-min Son was hit by the South Korean on the volley before crashing off the post. Goalkeeper Alex McCarthy was well beaten and it wasn’t long until he conceded the first goal of the match.

Harry Kane scores his 7th goal in his last 6 PL apps v @SouthamptonFC . This his 31st goal in 46 apps for club and country at Wembley pic.twitter.com/9CoUUdbO35

Southampton brought every player back for a Tottenham Hotspur corner in the eighth minute but did not deal with the short corner routine from Spurs. Trippier played the ball short to Christian Eriksen who fizzed in an immaculate low cross for Kane to get on the end of. The England captain had made his run to the front post and guided his shot past McCarthy to give Spurs a deserved lead.

However Southampton did not let the game get away from them and nearly equalised midway through the first half. Manolo Gabbiadini got in behind The Lillywhites defence before laying off to Pierre-Emile Højbjerg, who smashed in an effort from around twenty-five yards out. The Danish international’s shot hit the post and, thankfully for Spurs, Stuart Armstrong could not convert the rebound. The replays showed that it was actually a fingertip save from Hugo Lloris that forced the ball onto the post and that was not the only crucial save the Spurs captain had to make in the encounter.

Soon after, Son had a chance to double the lead for Spurs but his effort from outside the Southampton penalty area could only sting the fingertips of McCarthy in goal. Eriksen also tested McCarthy but his shot was straight at the goalkeeper and was the only other real chance for Spurs in the first half.

Spurs once more started brightly in the second half and an Eriksen free kick nearly doubled their advantage but for McCarthy, who diverted his effort for a corner kick. From that resulting corner, Spurs grabbed their second of the match courtesy of Lucas Moura.

It was quite a scrappy goal, with Saints captain Steven Davis failing to fully clear Kieran Trippier’s corner and Moura then having his shot blocked. However the Brazilian had a second bite of the cherry when the ball rebounded to him, which he dispatched past the helpless McCarthy. It was Moura’s quick reactions to pounce on the rebound which allowed him the time to guide his shot into the corner, which was not easy to do with the ball bouncing in front of him.

Straight after that Spurs picked up their third to put the game to bed. It came after persistent work from Trippier, who closed down Matt Targett’s attempted clearance, which allowed Harry Kane time and space on the right hand side of the Southampton penalty area. Kane only had a split second to react, but found the perfect cross for Heung-min Son to tap in for Spurs’ third.

Back to winning ways 💪

Southampton manager Ralph Hasenhuttl was watching on and could not have been impressed with the defending of his new side, however it was the Saints who were the better team for the latter stages of the game as Spurs eased off knowing that they had picked up another three points.

That good spell started immediately after Spurs’ third, with Nathan Redmond getting on the end of a Cedric Soares cross before unleashing a strike that rattled off Hugo Lloris’ bar with the aid of a deflection.

It was not long until Southampton had another chance but James Ward-Prowse’s whipped free-kick evaded everyone, including Maya Yoshida who looked like he would score, much to the relief of Hugo Lloris as he clung onto the ball. Steven Davis also wasted a good chance for the Saints, electing to pass to Ward-Prowse when it seemed as if the Saints captain was in a better scoring position himself.

Hugo Lloris then showed why he is one of the best goalkeepers in the world with a brilliant double save. The first, from Hojbjerg’s attempt, was routine but the second was a split-second reaction stop from Ward-Prowse, which the Southampton man really should’ve taken. The Spurs skipper was again called into action a few minutes later, this time tipping Charlie Austin’s shot round the post after some lax defending from Spurs.

Oliver Skipp (18y 79d) is the youngest player to debut for @SpursOfficial since Gareth Bale against Man Utd in August 2007 (18y 40d) pic.twitter.com/JA3z0eajFy

However, despite a brilliant display, Lloris would not cap his evening off with a clean sheet as Austin scored with almost the last kick of the game. All it took was a long ball over the top, which Austin latched on to before firing past Lloris in confident fashion. The Saints deserved a goal because of their second half efforts, but Mauricio Pochettino will be disappointed that his Spurs side were unable to achieve a clean sheet. They may also be annoyed with the assistant referee for failing to spot that Austin was ever so slightly offside for the goal.

The match also marked the Premier League debut of Oliver Skipp, who came on for Kieran Trippier with three minutes remaining. At 18 years and 79 days, the Spurs academy graduate is the youngest Spurs player to make his debut for the club in the Premier League since Gareth Bale in August 2007. 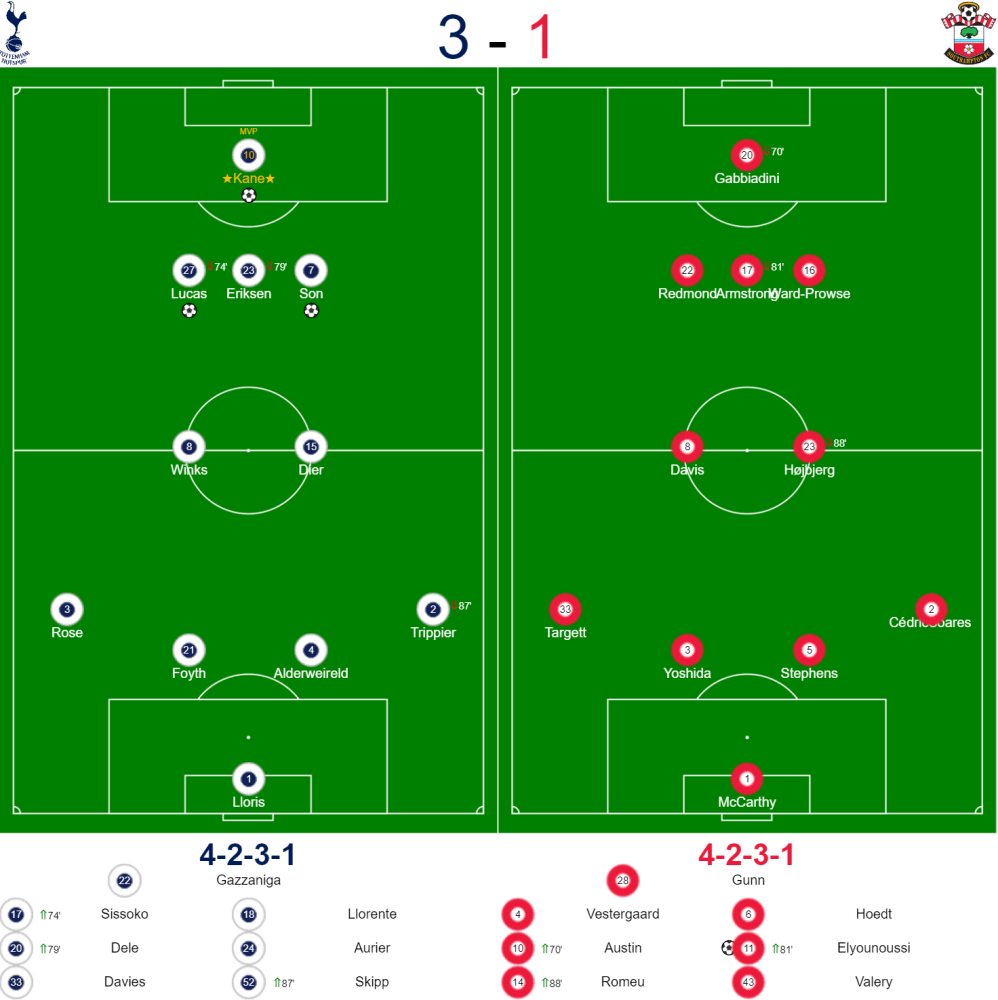 “Tough game, it is true – I was saying that maybe we conceded more chances in the last 30 minutes than in 90 minutes against Arsenal.

Yes, with 3-0 maybe we drop a little bit in our concentration I think we start to think the game was over and always it is so dangerous when there is so much time to play. Of course on the end, Lloris was man of the match because it was an unbelievable action that save, but that we cannot afford. In the same way I try to understand, it was a tough evening, difficult to play the three emotional games we played last week, you pay, it is not easy to feel fresh in your legs or your mind – play or not play, players that don’t play are the same.

For me the most important thing is to keep going, 33 points, third in the table and I think a fantastic Premier League season.” (football.london)

“We conceded three goals and our standards are better than that. We lost a bit of focus on the set-plays and people ghosted in. On reflection from the whole game, I don’t think anyone would say we didn’t deserve at least one goal. I really believe that if we produce those opportunities again in three or four games’ time then we’ll get our rewards.” (BBC Sport)

Hugo Lloris had a very good game and kept Spurs’ advantage with a number of key saves. However our man of the match goes to Harry Kane for his well taken goal and impressive assist. The Spurs striker is showing this season, that despite doubts over his match sharpness after the World Cup, he will always find a way to score. It is sometimes easy to forget just how good his record is, as Kane now has 117 goals in 168 Premier League games.

The hectic festive schedule has only just started for Spurs and they are once again in Premier League action on Saturday. Mauricio Pochettino’s team will travel to the King Power stadium to play a talented Leicester side in a late kick off before facing Barcelona at Camp Nou on Tuesday 11th December in one of their most important matches of the season so far.