Spurs will aim to get back to winning ways when they take on Premier League strugglers Southampton on Wednesday at Wembley. After the disappointment of the weekend, Mauricio Pochettino will be eager to see Spurs return to the top four as soon as possible, starting with the game against the team he was previously the manager of.

Tottenham Hotspur are in the middle of a very busy schedule. After three tough games last week there is no let up for them as after the Saints, they will play Leicester on Saturday before facing Barcelona in the Champions League.

After going without a win in ten Premier League matches, Mark Hughes paid the price and was sacked by Southampton despite a 2-2 draw versus Manchester United in his last match. He has been replaced by Austrian Ralph Hasenhuttl, with the club announcing today that the former RB Leipzig boss will takeover as manager after the game against Spurs.

Hughes only won three of his twenty-two Premier League matches in charge of Southampton and former goalkeeper Kelvin Davies will be in charge of stopping the bad run of form on Wednesday as the Saints sit eighteenth in the Premier League.

TEAM NEWS: @trippier2 (groin) has returned to training and is available for selection. pic.twitter.com/6g8RsZ0APc

Spurs will be without Jan Vertonghen as he serves his one match suspension, however they were boosted by the news that Kieran Trippier has returned from injury and is available for selection.

Mousa Dembele, Erik Lamela, Davinson Sanchez and Victor Wanyama are all still injured and will not be fit enough in time for the Southampton match.

Kelvin Davis has hinted that he will not be making major changes to the Southampton starting line-up and so it could be a very similar side to the one that achieved a 2-2 draw with Manchester United.

However Mario Lemina is suspended after accumulating five yellow cards this season. Danny Ings and Shane Long could both return from injury whereas Matt Targett, Ryan Bertrand and eighteen year old Michael Obafemi are all doubts.

The injuries to full backs Bertrand and Targett could mean that young French defender Yan Valery retains his place after making his first Premier League appearance for Southampton at the weekend. 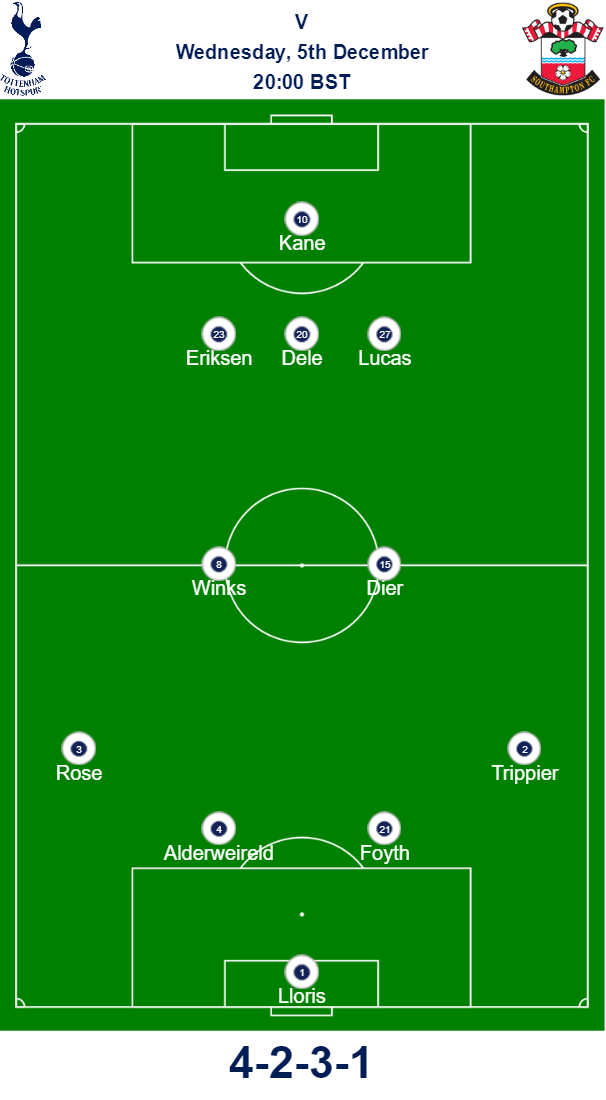 We may see a few changes from Mauricio Pochettino given the poor performance at the weekend and the fact that he is keen to maximise the most of his squad during the hectic festive schedule.

In defence we are predicting at least two changes, one of which is enforced as Jan Vertonghen is serving a one-match suspension after his red card on Sunday. Toby Alderweireld should slot into his place after being rested and there is also a chance that both the full back positions may be rotated.

Kieran Trippier could feature from the start, as Serge Aurier has played the last three matches in his absence, and it is a similar situation with Danny Rose. Although Ben Davies was rested for Wales in the international break, he has featured for Spurs a lot lately and so Pochettino may see this as a good time to rotate him with Rose, who has recently returned from injury to make the bench in the last few Lillywhites‘ games.

In midfield, Harry Winks is likely to come back in place of either Moussa Sissoko or Eric Dier. Sissoko has massively improved lately but, like a lot of his teammates, has played a number of matches in a short period of time. He could be the one who drops to the bench at the expense of Winks, who did not have enough time as a substitute on Sunday to have an impact on the match.

Lucas Moura is another player that should return into the starting eleven. The Brazilian started off the season in brilliant form but has not hit those heights since and Pochettino will be hoping that he rediscovers that form, particularly with Erik Lamela still absent.
Moura may come in for Heung-min Son and either play up front with Harry Kane or on the right hand side of midfield. There is a possibility that Dele Alli will be rested as well because he has started all three of Spurs’ games since the international break.

Despite this possibly being a time for Mauricio Pochettino to rotate some squad members, Harry Kane will not be one of them and should continue as the focal point for Spurs versus the Saints.

“I think to be involved in all the competitions is a successful thing for the club and us. At the same time to manage the circumstances and the games is so tough. Of course the difficult thing is for us no, but for people to understand, everyone has different opinions in every game, sure you pick one or another. That’s the good thing in football and to respect all the opinions. In our side is all the information we have every day and after to take the best decision to mix in the best way the team and the performance.”

“It doesn’t always work, like after Chelsea or Inter I was so humble after those two victories. I said today it is working and tomorrow maybe it doesn’t work. That is football it’s to take a decision, have a plan and apply common sense in your selection. When you work how we work it’s about information and trying to keep all fit. Of course that’s impossible to avoid injuries 100 per cent but when you have some indication that something could happen you need to believe in your squad. If not it’s so easy to manage football, but football is not easy to manage. In the Premier League it’s more difficult because the competition is so tough.” (football.london)

“The messages will be very simple, very clear. My role is to take the team on Wednesday. I don’t see the point in trying to get too much into (the players’) heads. They’re good players and I think we’ll get everything we can get into them before the game.

“They’re professional boys, and I like to think with their abilities there’s nothing stopping them putting in a positive performance and hopefully putting on a display that puts us in a position to come away with something.” (Tottenham Hotspur Official)

Spurs v Southampton One to Watch

Their position in the league indicates otherwise, but Southampton have some very talented players at their disposal. One of those is Portuguese right back Cedric Soares and we have picked him out as Southampton’s key player.

Soares is an attacking full back who gets at defenders, so if Southampton continue with a five man defence he could be allowed to use his attacking skills even more. He also showed in their last match versus Manchester United that he is a talented free kick taker so Spurs will have to be wary of that at Wembley.

Cedric Soares is just the seventh player to score a direct free-kick for Southampton in the #PL#SOUMUN pic.twitter.com/LrfrAPCko2

Anthony Taylor will take charge of the match between Spurs and Southampton. He was the referee in Spurs’ first home encounter of the season versus Fulham and he also officiated in Southampton’s 2-2 draw with Brighton in September. In the thirteen Premier League ties he has officiated in this season he averages three yellow cards per game but has yet to show any player a red card so far.

After a week of three tough matches, Spurs will be eager to put things right against Southampton. Although the sacking of Mark Hughes might give the Saints some impetus to go for it at Wembley, especially with their new manager Ralph Hasenhuttl watching, we think Spurs will be too good for them on the night.

Our prediction is Spurs 3-1 Southampton.