Spurs face a must-win match against PSV Eindhoven tonight in the Champions League group stage. Both sides are currently on one point after three games and will know that a win at Wembley is paramount if they wish to progress to the knockout rounds.

The last match between the two teams ended 2-2 in The Netherlands, with Spurs again conceding late on in the tie. Before that, Spurs were defeated by Barcelona at Wembley 4-2 thanks to the magic of Lionel Messi and in their first match went down 2-1 to Inter Milan at the San Siro. Spurs will be hoping that Barcelona run away with the group whilst they finish in the top two ahead of both PSV and Inter Milan. However, predicting a route to the next stage means nothing if Spurs do not win against PSV Eindhoven tonight.

Just like Spurs, PSV Eindhoven will feel like the game is one that they must win. The Dutch champions have won all their matches in the Eredivisie so far this season and look on course to win their fourth title in five years. However their form in the Champions League has been a lot different, with losses to Barcelona and Inter Milan as well as the draw against Spurs. Mark van Bommel’s side will know that if they win at Wembley then they have a real chance of progressing out of the group at the expense of Inter Milan and of course Spurs.

Spurs will be without their suspended captain Hugo Lloris after the goalkeeper received a straight red card versus PSV Eindhoven back in October. Mauricio Pochettino has a tough decision to make as either Michel Vorm or Paulo Gazzaniga will deputise for the French World Cup winner.

Vorm was on the bench in the previous game with PSV Eindhoven but since then Gazzaniga has been the back-up goalkeeper, appearing against West Ham in the Carabao Cup. Even so, Pochettino may choose to go with Vorm because of his experience but the form of Gazzaniga this season may encourage the Spurs boss that the experience of the Dutch keeper may not be needed.

Spurs still have a lot of players out with injury with Mousa Dembele the most recent casualty after going off early versus Wolves on Saturday. Other central midfielders Eric Dier and Victor Wanyama are also out meaning Pochettino has a mini crisis in midfield. In defence, Danny Rose and Jan Vertonghen are both still out for Spurs.

However two key midfielders will return for Spurs after being rested at the weekend. Dele Alli and Christian Eriksen did not start against Wolves but will almost certainly play a part against PSV Eindhoven in the Champions League.

For PSV Eindhoven, Steven Bergwijn is back after missing out the 2-2 draw last time around. The young winger recently won his first cap for Holland and has been linked with Manchester United and Liverpool in recent weeks. Along with Hirving Lozano, he will possess a threat down whichever side he plays on.

Other than him, the PSV Eindhoven team is expected to remain the same from the last encounter with Spurs. 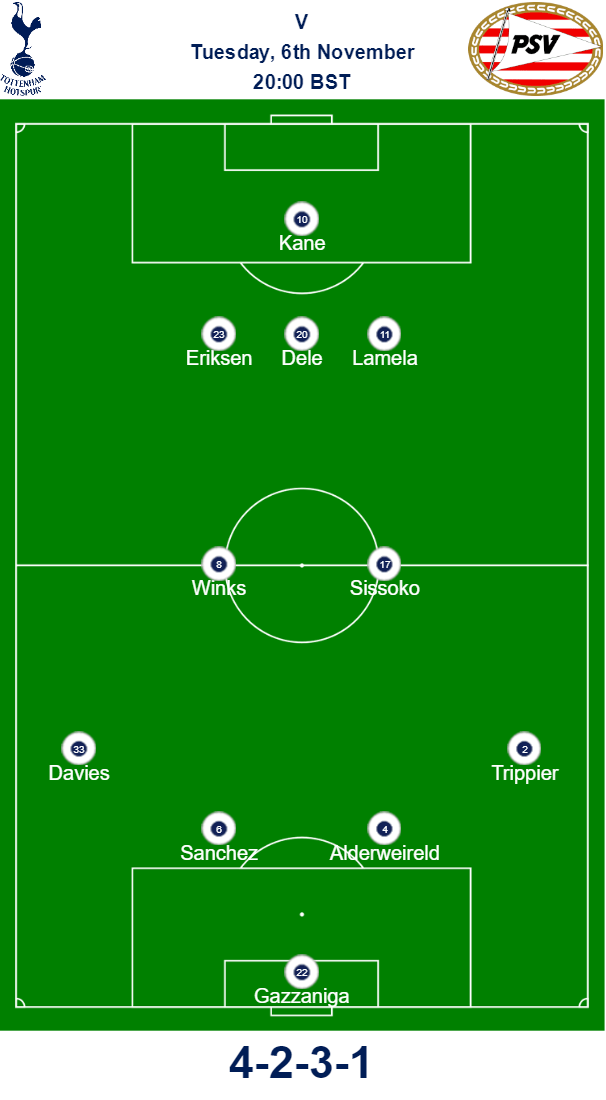 We think that Pochettino will go with Paulo Gazzaniga ahead of Michel Vorm as Spurs’ goalkeeper. The Argentine has done nothing wrong since coming into the Spurs team this season, whereas Vorm has looked quite shaky at times. Pochettino has shown over the years that he is a brave manager who is willing to give players a chance and Gazzaniga is ready to step into the Spurs team for this crucial Champions League encounter.

The Spurs defence almost certainly will compile of Kieran Trippier, Toby Alderweireld, Davinson Sanchez and Ben Davies unless Serge Aurier starts at right back. Juan Foyth has not been registered for Spurs’ Champions League squad this season so will play no part.

In midfield, Moussa Sissoko did well in a central role when he moved there in Spurs’ last game and may continue there alongside Harry Winks against PSV Eindhoven.

Predicting who will play behind Harry Kane is tricky, with Erik Lamela, Christian Eriksen, Dele Alli, Heung-min Son and Lucas Moura all vying for a start. Lamela has been excellent for Spurs this season and both Alli and Eriksen were rested by Pochettino with the PSV game in mind, so we expect all three to start.

When you compete at that level against Inter Milan or PSV, of course Barcelona, it is not easy to go to the next stage of the Champions League and qualify. When you are competitive at that level, if you are not good enough, if you are not clinical, or defend poorly like in the last minute in the Inter Milan game… If you don’t deserve to go, it’s disappointing but not embarrassing.”
“We need to do our job. We want to be in the next stage – it’s not only that we need the help of Barcelona winning the game; we need to do our job and we need to perform as well. I think it’s a great opportunity to get the three points and to have the hope to go to the next stage – and then we have Inter Milan here and play the last game in Barcelona. Maybe if they win it can help us, but we are the most important thing.” (BBC Sport)

“I cannot ask more from our fans. They are fantastic and will be fantastic. We cannot expect more. We the club, and first Daniel we feel sorry for them because we and they expected to be in the new stadium in that moment but it wasn’t possible. Only we can be grateful for them because to be at Wembley and support the team is so tough. For us it’s tough, but for our fans it’s tougher than it is for us. We’re always grateful for their support and we hope we can pay back all the effort by winning tomorrow. Winning games is the only way we can repay them for that.” (football.london)

“I think his progression was fantastic. Of course the credit is always for the players, but we have to give big credit to Toni Jiminez, the goalkeeping coach, who’s helping all the keepers to improve and grow. I think after one year and a half with us, I think his progression is fantastic and we were right when we signed him, because we believed and we knew him from Southampton. He’s still young for a keeper and has the potential to be top.” (football.london)

It's crunch time in the @ChampionsLeague.

COME ON YOU SPURS!

Slovakian Ivan Kružliak will referee Spurs v PSV Eindhoven on Tuesday. He has been in charge of one other Champions League group stage tie this season between Atletico Madrid and Club Brugge.

As Spurs found out in The Netherlands, PSV Eindhoven are no easy team to beat and have some dangerous players. However Spurs will be out to prove their European doubters wrong and, backed by the Wembley crowd, should be able to overcome the Dutch champions and keep their slim hopes of qualification alive.

Our prediction is Spurs 3-1 PSV Eindhoven