Spurs maintained pressure on the top two in the Premier League with an unconvincing victory over Leicester City at Wembley. Goals from Davinson Sanchez, his first for the club, along with Christian Eriksen and Heung-min Son ensured that Spurs went nine points clear of fourth placed Manchester United in the Premier League table on an eventful Sunday afternoon in London.

For Spurs, Fernando Llorente came back into the starting lineup in place of Lucas Moura and there was a rare start for Oliver Skipp who deputised for the unavailable Erik Lamela. Toby Alderweireld also started on the bench for Spurs, with Wednesday’s Champions League encounter with Borussia Dortmund very much in the mind of Mauricio Pochettino.

The first chance of the match went to Leicester’s Harry Maguire. It was a simple free kick from deep by James Maddison which was met by Maguire at the back post and he did well to guide his effort on target, forcing Hugo Lloris to tip the ball over the crossbar.

It continued to be a relatively sluggish start for Spurs but after seventeen minutes they had their first real opportunity in the match. After build-up play from Eriksen, Llorente and Son, Danny Rose found himself with a lot of space just inside the Leicester area. Rose opted to cut back on his right foot, when many though he would shoot first time, but still managed to get a shot away. However it was straight at Kasper Schmeichel, who was able to save before Leicester cleared the danger.

The even nature of the encounter showed when it was Leicester who had the next key opportunity. Harvey Barnes really should have made the better of his chance, having been fed through by Ben Chilwell. It was a brilliant pass to him and Barnes seem to be caught in two minds as whether to pass to Demarai Gray or go for goal himself. He chose the latter, but skewed his shot wide to let Spurs off the hook.

That miss proved costly as a couple of minutes later Spurs opened the scoring. A Kieran Trippier corner was played to Christian Eriksen on the edge of the area who had a better angle to cross from. The Leicester defence did not react well and Eriksen’s ball was near enough perfect as all that Davinson Sanchez had to do was get on the end of it. The Colombian’s diving header went past Schmeichel in a flash to give Spurs the lead and Sanchez his first ever Spurs goal. There were appeals of offside from Leicester, but right back Ricardo Pereira was playing Sanchez onside.

Davinson Sanchez is the 147th different player to score in the #PL for @SpursOfficial – only West Ham United have as many (also 147) pic.twitter.com/ZAnuvSiH0m

On the stroke of halftime, Youri Tielemans nearly levelled the scoring in bizarre circumstances. The Belgian, who was making his Leicester debut, hit the ball so sweetly from right by the corner flag that the swerve on it took it on target. Hugo Lloris fumbled the ball behind but actually did well do read the situation and get over in time to save himself embarrassment.

The second half proved to be a lot like the first for Leicester as they failed to take the key chances in the match. Firstly Demarai Gray had an opportunity to equalise after getting on the end of a Periera cross between Sanchez and Trippier. His header however was straight at Lloris when he would have certainly scored if he put it either side of the Spurs keeper.

Soon after Leicester were given the greatest opportunity yet to score after being awarded a penalty when James Maddison was fouled by Jan Vertonghen. Jamie Vardy had not started the match for Leicester but incredibly came off the substitute bench to take the penalty as his first involvement in the game. His penalty was a comfortable height for Lloris who was able to tip it round the post. It was a hectic three minutes of football and Vardy was made to rue his miss later on.

Hugo Lloris has saved a quarter of the penalties that he has faced in the Premier League:

Always have a chance. pic.twitter.com/IrSrZnssGT

Once again Spurs made Leicester pay and scored only a few minutes after a Leicester golden opportunity. This time it was good pressing from Oliver Skipp, which forced Leciester into a mistake. Fernando Llorente ended up with possession and gave the ball to Eriksen on the edge of the area who took one touch before firing past Schmeichel into the bottom corner to double the advantage for Spurs.

Leicester were still not giving up and in all honesty did not deserve to be 2-0 down. Harvey Barnes again missed a huge chance, having plenty of time and space to pick out a shot, but being denied by the feet of Lloris, who had an impressive game for Spurs.

The Foxes finally took one of their chances with fifteen minutes to go though. It was a simple yet well-worked goal as nice interplay between Tielemans and Periera allowed the Portuguese full back to set up Vardy who could not miss from inside the six yard box.

That set up a nervy ending for Spurs, however Heung-min Son was to have the last say. A promising Leicester attack was cleared by Moussa Sissoko before ending up with Son just inside the Spurs half. The South Korean could not be caught and made no mistake in finishing, showing Leicester a ruthless side that they did not bring to Wembley.

That goal finally took the sting out of Leicester and ensured that Spurs won their fourth Premier League match in a row to keep in touch with Manchester City and Liverpool at the top of the table. 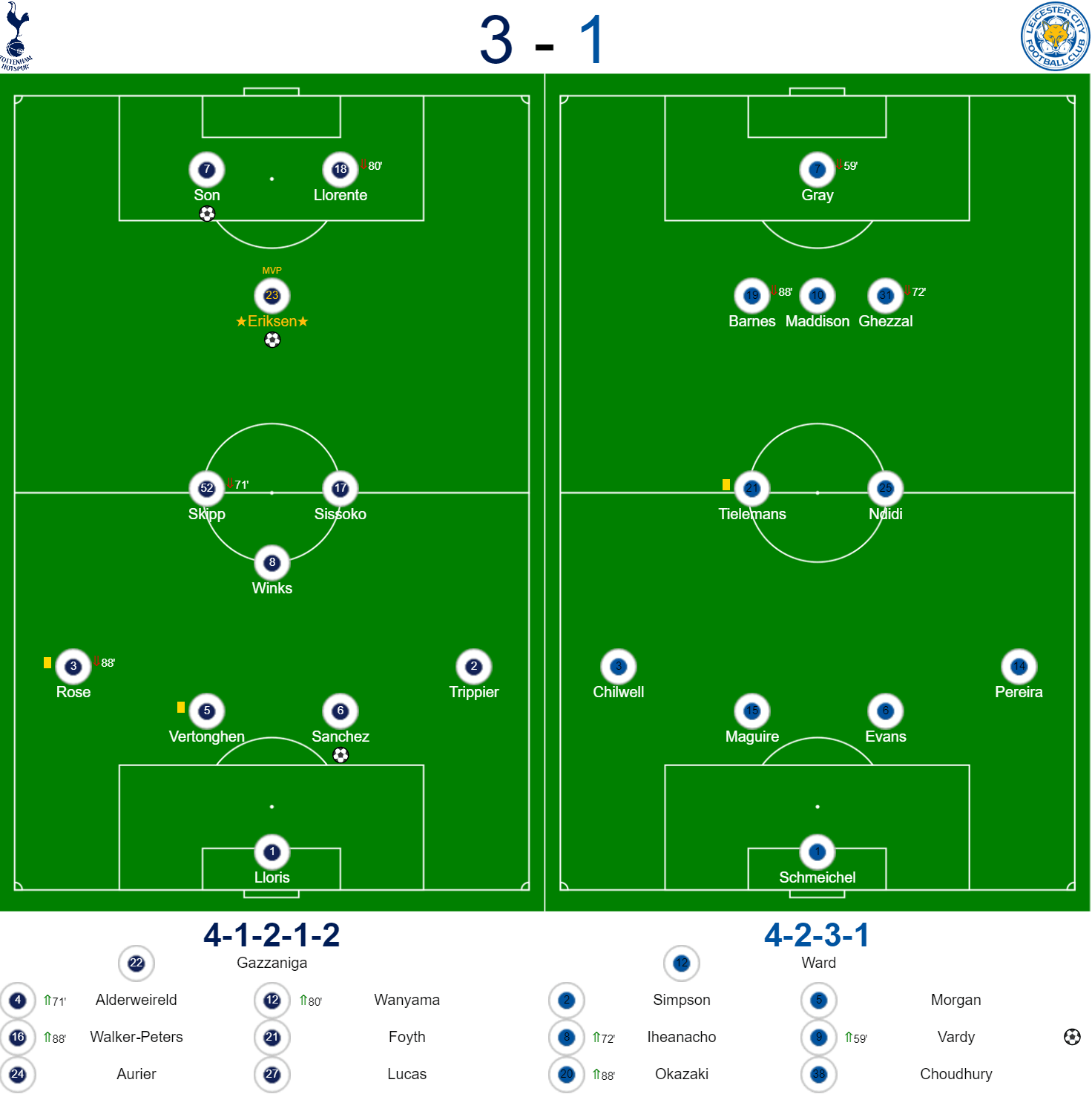 “Sometimes you win games not playing in your best. It was an even game. The way we conceded is more than we usually concede. I think the victory is fair. I am so happy. One more time to congratulate the players. Again their effort was fantastic. With all the circumstances that happened during the game and this season it’s so important to recognise that they are doing a fantastic effort and I am so proud of that.” (Football.London)

“It’s disappointing and again we are left with not a good feeling. We should’ve had the game between our hands with a lot of chances.”

“We created a lot of good moves with a lot of good intentions and we didn’t find good finishing. We had all the opportunities to win this game but we couldn’t finish. It leaves me with mixed feelings as we showed good quality but I’m very aggrieved with all these chances we had.” (skysports)

Christian Eriksen’s display was arguably the difference between the two sides as he scored one and assisted Sanchez’s opener. He was the class act Spurs needed to link midfield and attack and his range of passing ability, along with his exceptional first touch control, make him one of the best midfielders in the Premier League.

Spurs return to Wembley and the Champions League on Wednesday when they take on Borussia Dortmund in the first leg of the first knockout round. After that Spurs have an extended period of rest before an away match against Burnley in the Premier League on Saturday 23rd February.