Spurs host Chelsea at Wembley Stadium tonight in the first leg of the Carabao Cup semi-final as they hope to win the trophy for the first time in eleven years. The Blues come to Wembley for the second time this season, having lost out 3-1 in the Premier League thanks to an inspired performance from Heung-min Son.

It has been a difficult run in the competition for Spurs to get to this stage after matches against Watford, West Ham and Arsenal. A penalty shootout victory over the Hornets at Stadium MK started their run whereas a 3-1 victory over West Ham at the London Stadium meant Spurs faced Arsenal at the quarter final stage. A superb team performance saw Spurs achieve only their second win at the Emirates Stadium and the challenge did not get any easier from there as they were drawn against another London rival at the semi-final stage.

Chelsea have also had a testing run in order to get to the Carabao Cup semi-final. The biggest of those was their first match away against Liverpool in which an Eden Hazard strike saw them progress. Since then they’ve chalked up home victories against Derby and Bournemouth and Maurizio Sarri will be eager to get one over Spurs at the semi-final stage.

The last meeting between the two ended in a 3-1 win for Spurs with goals from Dele Alli, Harry Kane and Heung-min Son. Spurs also come into the match in excellent form having won fourteen of their past seventeen matches in all competitions. Their recent 7-0 demolition over Tranmere in the FA Cup also allowed Pochettino to rest many first team players and so the regulars should be back for this crucial encounter.

Lucas Moura sustained an injury against Tranmere and will not be available against Chelsea in the Carabao Cup. The Brazilian will be assessed ahead of the match against Manchester United on Sunday. Eric Dier and Victor Wanyama are continuing on-field rehabilitation after recovering from appendicitis and a knee injury respectively and will not be in action on Tuesday.

Jan Vertonghen and Mousa Dembele are back in training but are not expected to be included in the squad against Chelsea whereas Erik Lamela has recovered from illness and should be fit enough to be on the bench on Tuesday.

For the visitors, Willian is a doubt after getting injured versus Southampton last week and Ruben Loftus-Cheek and Olivier Giroud are both expected to be out. Spanish winger Pedro is also a doubt despite returning to training this week after a hamstring injury.

Chelsea are expected to go close to full strength, with N’golo Kante and Eden Hazard to start. Alvaro Morata may also get the nod after scoring twice against Southampton.

📋 @GazzanigaPaulo is set to start tomorrow's @Carabao_Cup semi-final against Chelsea.

We think Spurs will go close to full strength against Chelsea in the Carabao Cup at Wembley.

The goalkeeper will be Paulo Gazzaniga after Mauricio Pochettino indicated the Argentine will start in his press conference.
The back four will most likely consist of Kieran Trippier, Toby Alderweireld, Davinson Sanchez and Danny Rose after all but Sanchez were rested against Tranmere on Friday.

Harry Winks will likely return to the side to form the base of a midfield diamond, the same formation that downed Chelsea last time they visited Wembley. In that formation, Christian Eriksen and Moussa Sissoko will play either side of Winks with Dele Alli playing the more advanced role.

Up front, Heung-min Son should partner Harry Kane with both players in fine goalscoring form for Spurs. 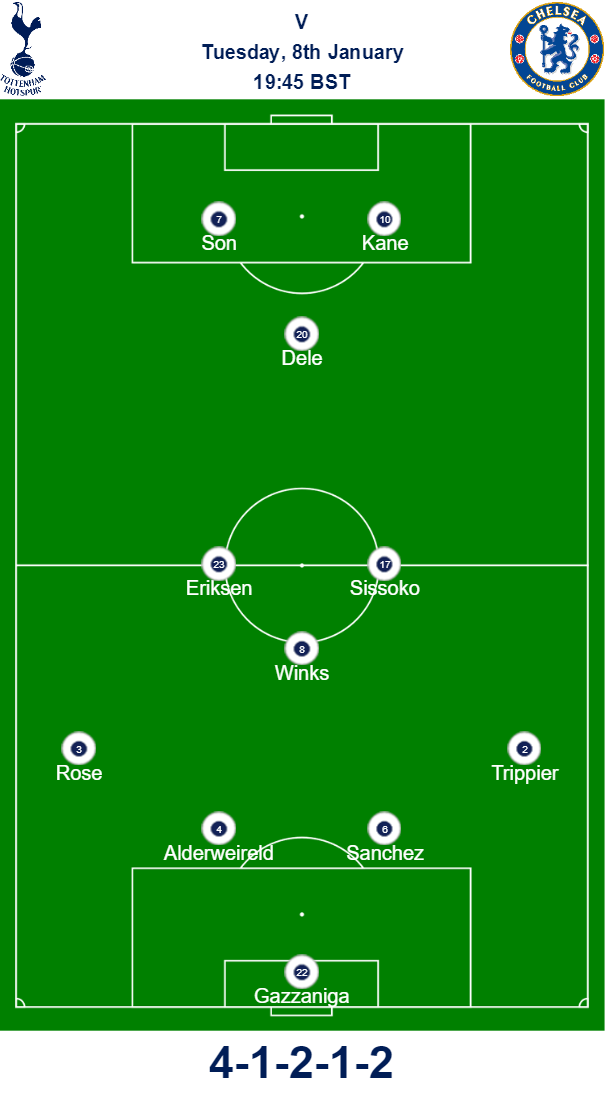 “We’re going to try, like the FA Cup and now the Carabao Cup, we’re going to try to win. Every time Tottenham play it’s always in my mind, it not the names that play. It’s about the quality and we have a great quality in our squad. We have a strong squad. It’s not about playing one or another it’s about the responsibility to win and tomorrow we are going to try to put the best starting XI out to win the first leg.”

“For me, football it’s about to believe and have faith in the way that you play. Sometimes in football it is not mathematics, it is not to plus two is four. In football it is different, a lot can happen, that is why we are involved in four competitions, we are in a very good position in the Premier League. No one expected, but we expected to be competitive.” (football.london)

“I agree because he is a very good coach, one of the best at the moment, I agree he has to win a trophy, I hope not this.”

Michael Oliver will be the referee between Spurs and Chelsea in the Carabao Cup at Wembley. The official has took charge of Spurs once and Chelsea twice this season. Back in September he was in charge of Spurs’ match against Liverpool whereas he was the man in the middle in Chelsea’s home matches against Crystal Palace and Manchester City.

VAR will also be in use at Wembley, with Steve Child being the VAR official.

With the first team players having a well-earned rest whilst the second string team thrashed Tranmere 7-0, we expect them to come back in and perform well for Spurs. Chelsea have a great squad and will go full strength, but we think home advantage will be enough for Spurs this time round.

Our prediction is Spurs 2-1 Chelsea.