After a spirited performance against Barcelona, Spurs host Cardiff at Wembley on Saturday in the final game before the October international break.

Spurs have won their last two games in the Premier League and are 4th in the table, 4 points behind joint leaders Man City and Liverpool. They were outclassed by Lionel Messi in the Champions League but showed remarkable character and fight to keep themselves in the match until late on. Goals from Harry Kane and Erik Lamela meant that Spurs kept up their run of scoring in every game that they have played so far this season.

Lamela and Lucas Moura impressed against the Spanish champions and will be important players for Spurs in the coming weeks as a number of players are still out with injury.

Cardiff have had their worst start to a league campaign since 1964/65 and are currently in the Premier League relegation zone. They are yet to win in 7 games on their return to the Premier League and have scored just 4 goals this term. Their most recent game was a 2-1 defeat at home to Burnley, which was their fourth loss in a row.

Neil Warnock won a record eighth promotion with Cardiff last season with his much maligned, yet effective, style of football. This was despite the fact he came to the club when they were near the Championship relegation zone and the financial power of many other clubs in the division. His side are having a tough time so far even though they earned two clean sheets in their first three matches.

The match against Spurs is therefore highly important for them in order to get their season up and running.

Like they were against Barcelona, Spurs will be without the injured Jan Vertonghen, Dele Alli, Christian Eriksen, Mousa Dembele and Serge Aurier. Michel Vorm has recently returned to training and there is also uncertainty over the fitness of Erik Lamela after he was substituted late on in midweek with an injury.

Lee Peltier, Aron Gunnarsson and Nathaniel Mendez-Laing are all injured for the Bluebirds whereas Junior Hoilett has a chance of returning to the team after missing the defeat to Burnley.

One of Bobby Reid, Danny Ward and Kenneth Zohore is expected to lead the line for Cardiff although Reid is also capable of playing as second striker.

Set pieces will be Cardiff’s prime threat to Spurs. They are a strong and physically dominant side and have two long throw specialists, captain Sean Morrison and Callum Paterson. 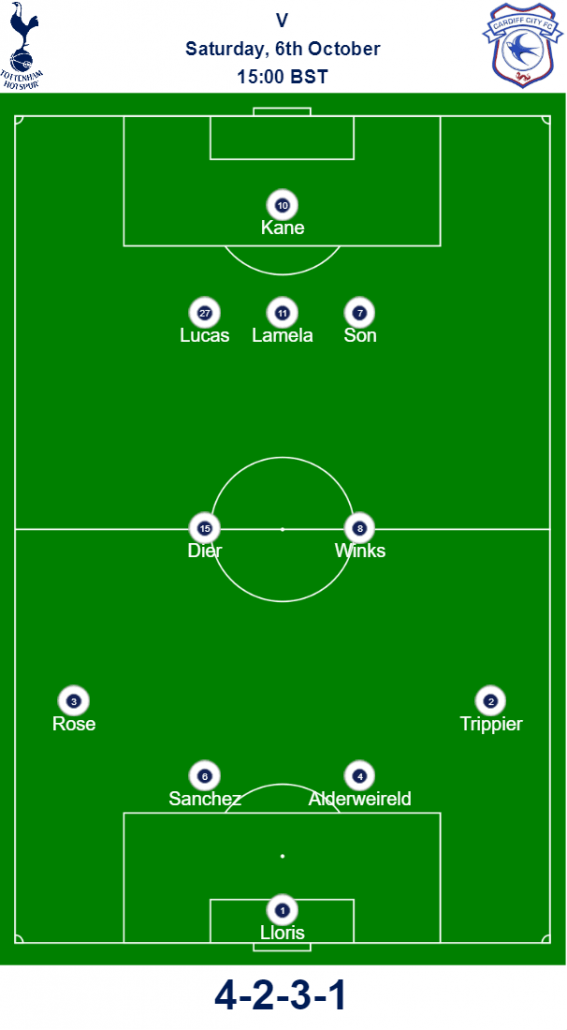 We believe Mauricio Pochettino will go with a 4-2-3-1 formation like he did against Barcelona.

Hugo Lloris will continue in goal despite his error on Wednesday. Paulo Gazzaniga would be right to feel unlucky as he performed admirably when deputising for Lloris however Pochettino evidently trusts his captain and wants him on the pitch for his leadership skills as well as his experience.

Danny Rose is expected to come into the team instead of Ben Davies despite his good performance against on Wednesday. The rest of the back 4 should stay how it is because of the injuries Spurs have.

In midfield we believe Eric Dier will play instead of Victor Wanyama alongside Harry Winks in the centre of the pitch. Oliver Skipp made the bench in the Champions League and could get some game time but that is unlikely unless there are further injuries.

The three attacking midfielders that started in midweek may all start against Cardiff. Heung-min Son had a quiet evening but will likely be picked ahead of Moussa Sissoko whereas Erik Lamela might continue in the central role which he excelled in against Barcelona.

Harry Kane is, of course, the first name on the teamsheet. In the last few games he has showed signs that he is back to his best but will have a battle on Saturday against a physical Cardiff defence.

A typical Warnock signing, Sol Bamba came in on a free transfer soon after Warnock joined the club. Since then he has been a stalwart in the Cardiff defence so much so that his manager has compared him to Liverpool defender Virgil van Dijk. Although he has been part of a leaky defence this season, it will be interesting to see if he can keep Harry Kane quiet on Saturday.

Sounds like Sol Bamba is loving life with Neil Warnock in Cardiff.

“I think with full respect to Cardiff it will be a tough game too. In the Premier League there are no easy games. Everyone can think the motivation to play against Barcelona and it looks like we are going to play Saturday and it will be an easy game. For me it’s the opposite. The most difficult game is the game that everyone believes outside of the team that you must win. For us it’s so important to be motivated in the same level. If not we are going to struggle.”

“There are a lot of examples in football when you don’t respect the opponent. We have full respect to Cardiff. It will be so tough. It has been difficult to beat them for different teams. We were watching. I think a similar style or philosophy to Huddersfield and it was so tough for us to beat them. Of course they are three important points that we have ahead. We’re so focused in trying to not be affected by Wednesday. It’s true the effort was massive. We need to be ready. The competition doesn’t wait for you. We need to be ready again to play tomorrow.” (football.london)

“I don’t want it to sour, so we have to pull our fingers out and get the fans on board to keep us here until January when we can get some fresh faces in.”

“I’m afraid that is the reality of management at the moment. You just have to keep on doing your job. I have a conversation with Vincent twice a week and he tells me where I am going wrong. I can’t do any more than what we are doing and I don’t think Vincent can. I don’t get the impression he’s becoming impatient, but I don’t reckon any manager feels that. It just happens one day you are in a job and the next day you are out.”

“Any manager will tell you, there are times you think ‘is it worth it? But then I see 30,000 Cardiff fans singing against Burnley and I think ‘yes it is’.” (BBC Sport)

Mike Dean will referee the game at Wembley. He has taken charge of 5 Premier League matches this season, brandishing 20 yellow and 2 red cards.

It’s a cliché but no game in the Premier League is easy and Mauricio Pochettino will make that clear to his players. Spurs have been grinding out wins in the Premier League of late without playing their best football and, given their injuries, a similar performance may occur at Wembley on Saturday.

Our prediction is Spurs 1-0 Cardiff.