A late winner in stoppage time from substitute Christian Eriksen ensured that Spurs capped off a memorable week and maintained their spot in third position in the Premier League. It was beginning to seem like it wouldn’t be for Spurs, but Eriksen’s powerful strike past Joe Hart from a Harry Kane knockdown was enough to give Tottenham Hotspur the win and send those at Wembley home happy.

Mauricio Pochettino had a number of selection issues to contend with and many of those who were doubts before the game were not risked. That meant that eighteen year old Oliver Skipp made his full Premier League debut in central midfield and Ben Davies played at centre back alongside Toby Alderweireld. The fact it was such a rotated squad and yet Spurs still managed to grind out a result has been the summary of their season so far and a testament to Mauricio Pochettino for getting the most out of his squad.

Oliver Skipp is the 13th academy graduate to be awarded a #thfc debut by manager Mauricio Pochettino. [Daily Mail] pic.twitter.com/6ZXi06m67L

For Burnley, Kevin Long came into the side to make a three man central defence and Aaron Lennon started on the right wing against his former club.

In a first half of limited clear openings, it was Spurs that had the most opportunities. Firstly Lucas Moura had an early chance for Spurs but his guided volley could not be diverted goalwards. Soon after, a swift Spurs break involving Harry Kane and Moussa Sissoko gave Erik Lamela the chance to score on his first Premier League start since returning from injury. However Joe Hart did well to stop Lamela, who in fairness should have done a lot better as his shot was only stabbed towards Hart.

Despite not offering anything going forward in the first half, Burnley were still in the match and nearly took the lead after an error from Hugo Lloris. The Spurs goalkeeper gifted the ball to Phil Bardsley who clipped in a cross, but it was just too high for Ashley Barnes who could not direct his header downwards.

Oliver Skipp impressed in the first half and looked composed in the middle. Spurs were the better side and created more chances but ultimately Burnley had defended well and Spurs needed more attacking nous to open the scoring in the second half.

However it was Barnes again that had an opportunity to give Burnley the lead only a matter of minutes into the second half. Robbie Brady’s free kick was met by Aaron Lennon at the back post, who volleyed across to the unmarked Barnes. The Burnley striker made a good connection with the ball on the turn but, thankfully for Spurs, it was blocked by Toby Alderweireld.

Eriksen the Match Winner Against Burnley

Christian Eriksen was introduced in the second half as Spurs looked to get a win and extend their record of twenty Premier League matches without a draw. The Danish playmaker was involved in Spurs’ next big chance, spraying the ball out wide to Danny Rose whose cross was missed by Harry Kane but fell to Erik Lamela. The whole of Wembley expected the deadlock to be broken but Joe Hart did superbly to get down low and parry the effort out of harm’s way and Kevin Long did equally well to clear.

REPORT: Christian Eriksen came off the bench to score a 91st-minute winner for Tottenham and seal a 1-0 victory over Burnley at Wembley on Saturday.https://t.co/5xJz67Jr8Q pic.twitter.com/EwluavxSDO

The chance reflected the pressure Spurs were having in the encounter and Lamela had another double chance for Spurs from a low Eriksen corner, both of which were blocked.

Burnley’s stubborn defence looked like it was going to keep a clean sheet, especially when Heung-min Son could not hit the target after a good knockdown from Fernando Llorente. Dele Alli was next to go close, but was thwarted at the back post by some brilliant defending by Phil Bardsley who stopped Alli from netting an easy opener.

Just as it seemed that it was not going to be for Spurs, a long punt forward was won by Llorente, taken down by Alli and fell to the feet of Harry Kane. The Spurs striker has shown even more so this season that he is more than a finisher and had the awareness to find the unmarked Eriksen around ten yards out.

Whereas good defending and lacklustre finishing had stopped Spurs from gaining the lead in the encounter, Eriksen made no mistake by firing his shot into the roof of the net just inside second half stoppage time.

Surprisingly it was Eriksen’s first Premier League strike of the season and it gave Spurs what could be a priceless two points at the end of the season. It was the 100th Premier League match that Mauricio Pochettino had been in charge of as Spurs boss and, as long as they keep winning, his team will have Manchester City and Liverpool in their sights. 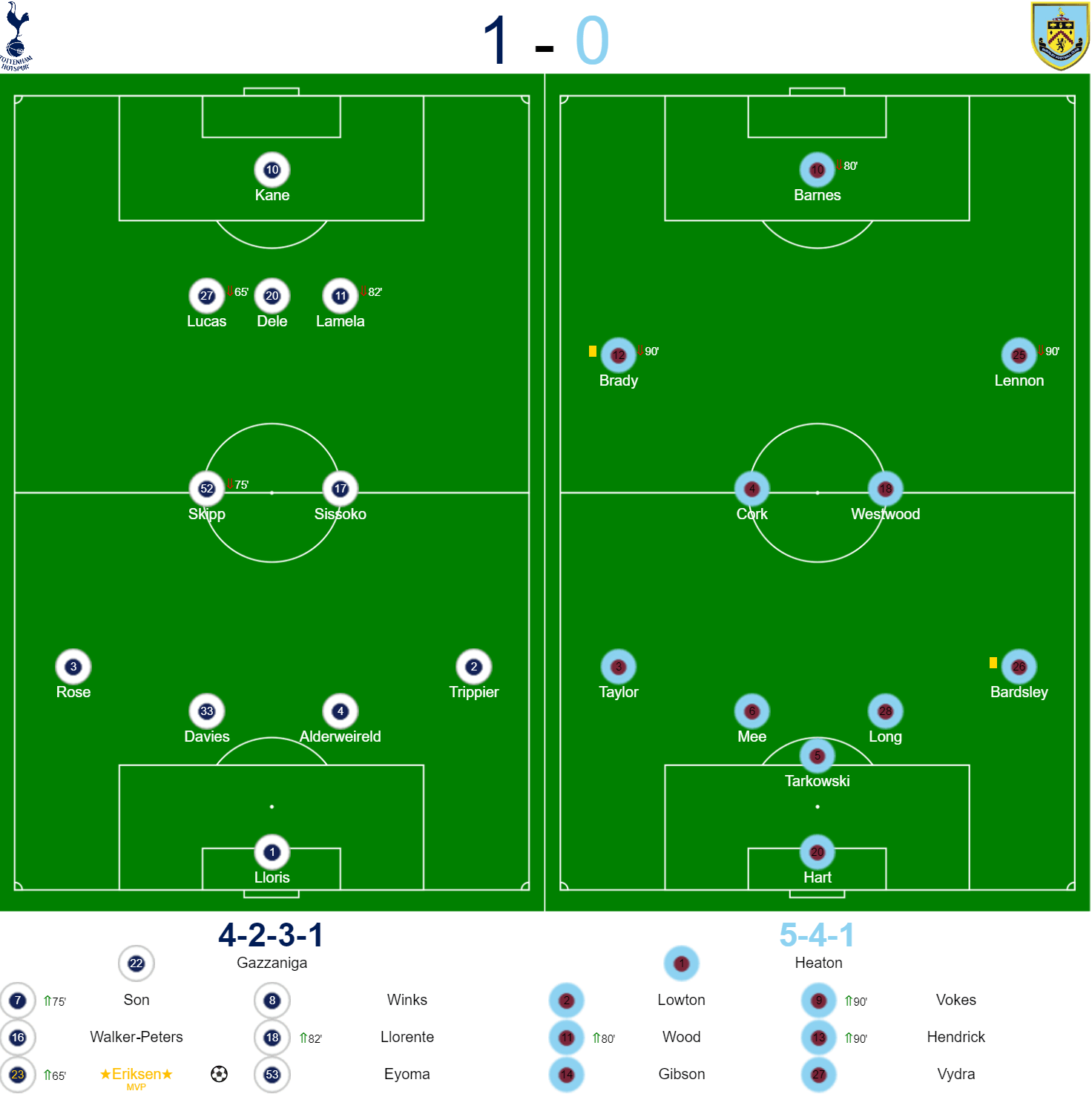 It was fully deserved the victory. We know very well that we need to play for 90 minutes plus all of the injury time. We didn’t concede one chance or shot on target. The victory is massive for us.

We are in a very good position. We are there, that is the reality after 17 games 39 points we are third in the table. That is a massive achievement for us. We are there, we are close. In football all is possible. Look what happened in the Champions League after three games only one point and nobody believed. We believed it was possible and in the end we believed and now are in the next stage of the competition. Football is the same. There are a lot of things you need to put into consideration but the most important thing in football is belief and faith in the way you play and work and if you give 100 per cent all can happen. (football.london)

Despite being a second half substitute, Christian Eriksen is our man of the match for Spurs. He made a number of key passes even before his goal, which could have led to Spurs gaining the lead, but his winner was what made the difference in the end, so he gets our pick.

Spurs are immediately in action again as they will take on Arsenal at the Emirates Stadium in the last eight of the Carabao Cup. Mauricio Pochettino’s team then have a difficult away match in the Premier League just four days later as they travel to Goodison Park to face Everton.