Premier League set to date for the earliest return to action

The Premier League recently announced alongside The FA that both the Premier League and the EFL’s seasons would cease operation due to the Coronavirus COVID-19 outbreak until April 4th. However, with the pandemic worsening in the UK, it was thought that the April 4th return date would be premature.

Many questions have surrounded the conclusion of this Premier League season including whether Liverpool would still win the title if the league was to stop and whether teams would be relegated? We’re in unchartered waters with this situation and it’s something that the EFL or Premier League have had to deal with previously.

We brought the news to you via our Twitter page that all 20 Premier League clubs were set for a virtual meeting this morning with the league hierarchy in a bid to try and plan and decide what will happen with the rest of the season.

We have collectively agreed that the professional game in England will be further postponed until no earlier than 30 April.”

Additionally, the FA have made a decision to abolish a rule stating that a league competition has to be finished by June 1st. The FA has decided to extend this deadline indefinitely so that the Premier League and EFL can finish the 19/20 season.

It seems clear that the relevant footballing authorities have a desire to complete the 19/20 season as a matter of importance and we feel it’s certainly the right thing to do. As we wrote yesterday on or Spurs Media Watch page, if the season is to resume at a later date, Spurs will have a huge boost in terms of their team selection with Harry Kane, Steven Bergwijn, Moussa Sissoko and Son Heung-min all nearing closer to a return to the action.

This statement comes after UEFA announced that EURO 2020 will be postponed and instead be played in 2021 providing that the COVID-19 pandemic. The decision was made to allow domestic European competitions enough breathing space to complete their respective seasons but also to make sure the integrity of each competition stays intact.

We feel that the decision made by both the FA, Premier League and UEFA is the correct one. To conclude the season know would cause huge financial and legal implications for football clubs. Imagine how we would feel as Tottenham Hotspur supporters if we were top of the league to be told that the season is to be stopped without a champion being crowned? We’d be livid.

One thing that a lot of fans aren’t remembering is the safety and welfare of players, coaching staff and the fans. We all want football to return and we feel lost without it but the safety of THFC players and staff members has to come first and we have no doubt that it will.

Tottenham Chairman Daniel Levy yesterday issued a statement via the official Spurs website surrounding the issues the club is facing amid the COVID-19 crisis.

Levy firstly offered some explanation as to why Spurs have published their end of financial year findings at such a sensitive time. Spurs have a legal duty to publish such findings by March 31st at the end of the tax year for 2019.

Levy added: “We are all facing uncertain times both at work and in our personal lives. I have spent nearly 20 years growing this Club and there have been many hurdles along the way – none of this magnitude – the COVID-19 pandemic is the most serious of them all.”

The statement also explains that all fan-facing operations have been ceased until further notice but the Spurs online store will remain open.

The statement is then concluded by Levy explaining that Tottenham Hotspur’s priority is the health and well-being of all its staff, players, their families and most importantly the supporters.

“Please look after yourselves and stay safe and healthy. This is more important than football.”

It’s a touching message from Daniel Levy and even though he does divide opinion among Spurs fans, you can’t fault the statement he’s issued and we certainly feel like it was needed at a time where Spurs fans want to seek clarity. You can find the full statement below. 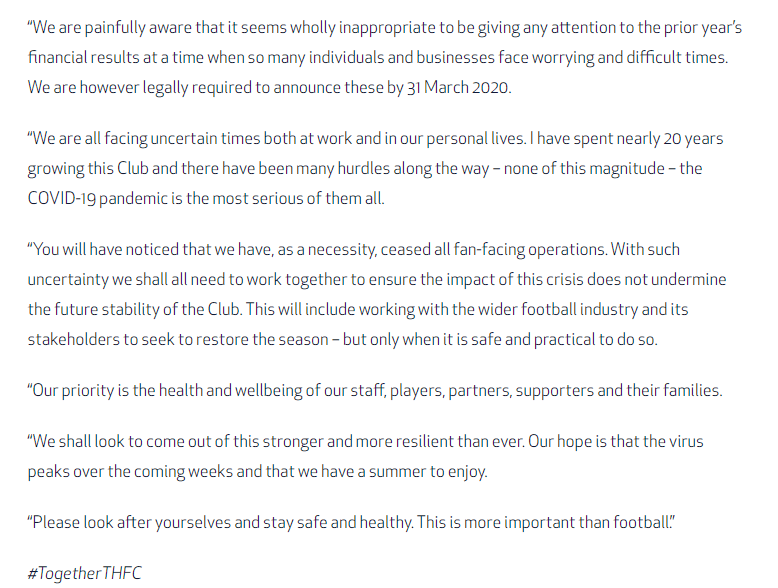 Tottenham Hotspur Stadium naming rights are close to being finalised

Why Do Spurs Have A Cockerel?
Scroll to top