A Spurs side without the rested Christian Eriksen and Harry Kane recorded an impressive 2-0 away win at Leicester on Saturday to consolidate their place in the top three of the Premier League.

It was the tenth time in sixteen games that Spurs were on the road in the Premier League this campaign but Mauricio Pochettino’s side have shown so far this season that they have no problem with playing away from home and once more put in a solid performance.

In a quiet first half, Leicester started brightly with full backs Ben Chilwell and Ricardo Pereira putting in dangerous crosses which the Spurs the Spurs defence, marshalled by Belgian duo Toby Alderweireld and Jan Vertonghen, were able to deal with.

With it looking like it would be goalless going into the break, Heung-min Son popped up with a piece of magic to give Tottenham Hotspur the lead. Just before the opener, Son had linked up with Dele Alli but the England international was thwarted from going through on goal by some good defending by Wes Morgan.

However Spurs made their late pressure in the first half pay. Immediately after the Alli chance Son, Moussa Sissoko and Lucas Moura all combined until the ball fell to the feet of the South Korean captain. Once Son cut inside onto his left foot, there was only one thing he was going to do and he did it to perfection. His shot was fizzed into the top corner from outside the area, leaving Leicester goalkeeper Kasper Schmeichel with no chance.

The moment of magic from Son changed the halftime team talk for Pochettino and ultimately proved to be the turning point in the match.

Fifteen minutes into the second half, Spurs grabbed their second through Dele Alli. A misplaced pass from Nampalys Mendy allowed Ben Davies to fire a pass forward to Lucas Moura, who then fed Son down the left hand side. The goalscorer then turned provider by floating in a perfectly weighted cross to the back post for Dele Alli to header in his 50th goal for Spurs.

Alli’s strike took the sting out of the game, which was good from Spurs’ point of view, even so Christian Eriksen and Harry Kane made some late cameos for the Lilywhites. Their absence from the starting line-up was entirely justified given the result versus Leicester and the magnitude of their tie with Barcelona on Tuesday.

There was some late pressure from the home team and a shot from Rachid Ghezzal was saved comfortably by Hugo Lloris, who had otherwise been untested in the Spurs goal. It would be the last main chance in the match as Pochettino’s team recorded another Premier League away win to keep them third in the Premier League table. 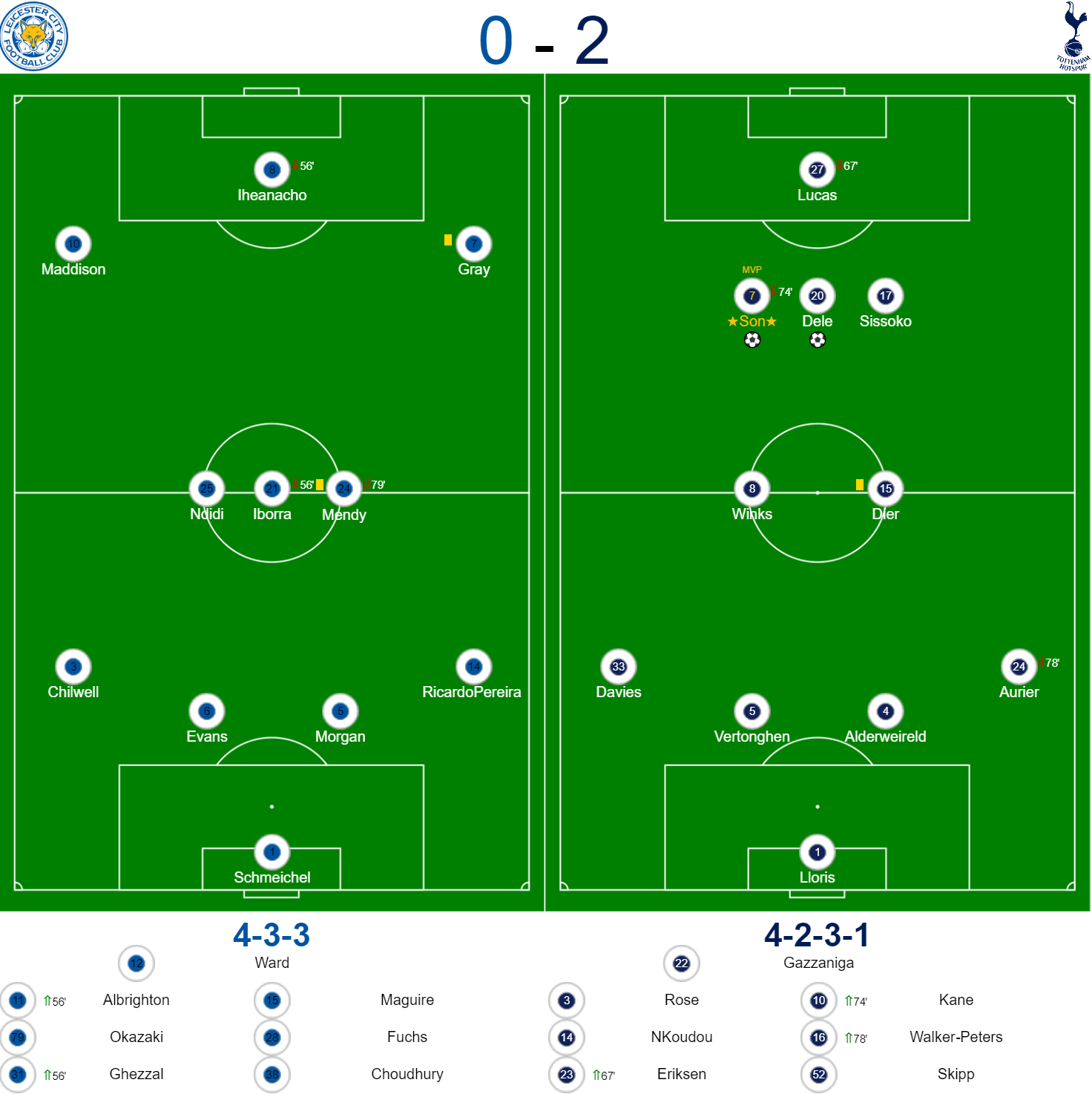 What The Managers Said

“A very solid performance, I’m very pleased. It was an unbelievable moment and a great goal by Son. It was very important for our confidence to go into the second half believing we could win. I am bit surprised the Premier League put us in the position of playing at this time because we travel to Barcelona on Monday and that will be so tough. We didn’t receive the help we needed from the Premier League but we are going to be ready to fight in Barcelona.” (BBC Sport)

All the players that we have in the squad, the younger ones like Oliver Skipp or Troy Parrott, who was involved today for the first time, it’s because they’re involved in the first team during days, during weeks, during months, and it’s only to give the possibility to play. I don’t doubt and I am not worried about players who are injured or don’t perform in their best, because we have another who can replace them. I promise we are going to win or lose with one or another. (football.london)

“We started very well and it was a shame because we wasted good opportunities without the good clinical edge, the right pass or the right control.With more calm and more quality we could have had more opportunities in the first half. We were disappointed about our lack of clinical precision with the ball. We deserved to compete to the end against this team because it was a good start and we had good play.” (BBC Sport)

Because of his goal and assist, Heung-min Son is our pick for Spurs’ best player against Leicester. Mauricio Pochettino needed him to step up with Harry Kane being rested and he did just that, with a sublime opener and a perfectly weighted cross which allowed Dele Alli to double the lead.

Alli, along with centre back pairing Toby Alderweireld and Jan Vertonghen, was very impressive in an all-round good team performance against a talented opponent.

Spurs have set off for Barcelona in their crucial final Champions League group stage game. Mauricio Pochettino’s side need to go to Camp Nou and better the result of Inter Milan, who face PSV Eindhoven at the same time. Spurs’ next match in the Premier League will be on Saturday 15th December versus Burnley at Wembley.