Spurs are back to Premier League action on Saturday with a trip to Yorkshire to face Huddersfield Town. The squad will be buoyed by their two victories in the last week against Brighton and Watford.

Erik Lamela has forced himself firmly into starting lineup for Spurs with his recent form. The Argentine has 3 goals in his last 4 games and will likely be joined by Dele Alli in the team. Alli captained Spurs midweek for the first time and after missing out against Inter Milan and Liverpool with injury, Mauricio Pochettino will be very pleased that he is back to full fitness.

Christian Eriksen will miss the encounter with an abdominal injury. It is not expected to be a major injury and Pochettino is hopeful that he will be available in time for the Barcelona game. Alli should take his spot as the attacking midfielder in the Spurs starting XI against Huddersfield

Hugo Lloris is a still a major doubt for the game. An assessment will be made on his fitness on Friday and, similar to Eriksen, he may return in time for Barcelona.

Spurs’ other goalkeeper Michel Vorm is definitely out of the Huddersfield game with injury as is Serge Aurier after sustaining an injury against Watford in the Carabao Cup on Wednesday. 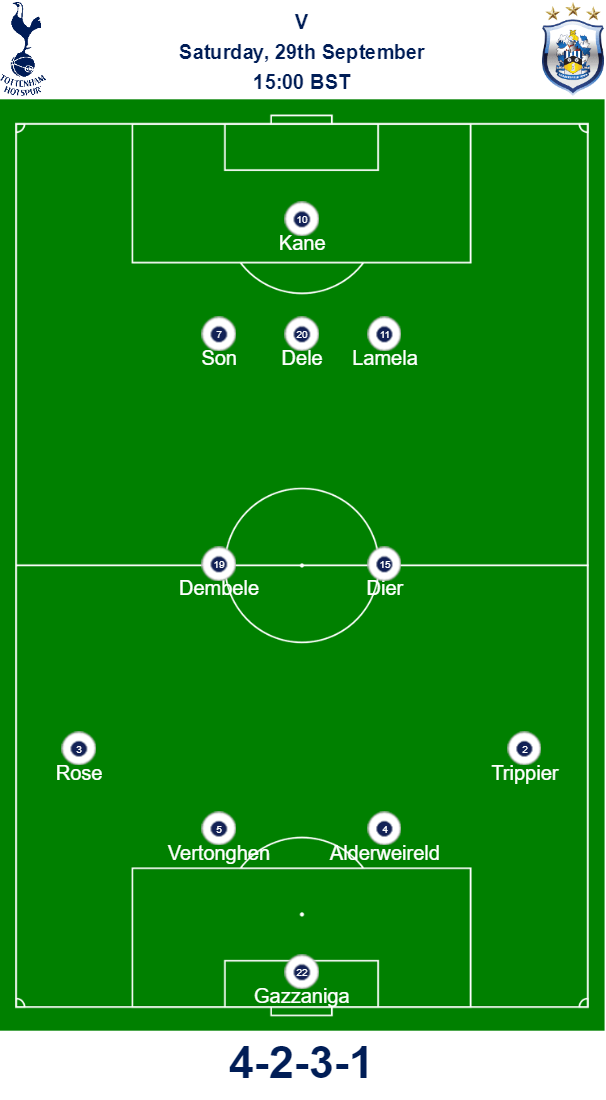 Paulo Gazzaniga will continue in goal should Hugo Lloris not be fully fit. His penalty heroics against Watford and solid performance against Brighton mean that he could have replaced Vorm as Spurs’ second choice goalkeeper.

Toby Alderweireld played midweek alongside Davinson Sanchez but Jan Vertonghen will return to the team. Sanchez will therefore drop to the bench unless Pochettino chooses to go to 5 in defence. Given that Spurs have won their last 2 matches playing 4-2-3-1 it is very unlikely that a tactical change will happen.

Kieran Trippier is a certainty to return to right back given Aurier’s injury and Danny Rose should take the place of Ben Davies at left back.

Eric Dier is likely return to the starting XI after being rested midweek. Although he has not been at his best this season Pochettino trusts him and the return to fitness of Victor Wanyama will mean that Dier has to perform for his place in the side.

With Eric Lamela and Dele Alli playing well midweek they are expected to start and it is a tough choice between Lucas Moura and Heung-min Son to start on the other wing. We’ve predicted that Son will play however it could easily be Moura particularly with the Champions League tie against Barcelona on the horizon.

Harry Kane will once again spearhead the side after being rested midweek in the Carabao Cup.

As for Huddersfield Ramadan Sobhi, Collin Quaner and Juninho Bacuna are all doubts and are not expected to be available in time for the Spurs game.

David Wagner may experiment with the formation of his lineup given their lack of goals this season. It has been rumoured that he will go to a 5 at the back formation to allow him to go with two strikers. Therefore target men Laurent Depoitre and Steve Mounie could start alongside each other on Saturday.

Huddersfield One to Watch

Aaron Mooy has had a quiet start to the campaign but is Huddersfield’s most creative player and offers a goal threat from midfield. The former Manchester City player will be eager to rectify his and Huddersfield’s slow start to the season against Spurs.

Huddersfield v Spurs -What the Teams have Said

“For us, we always take the game we have ahead and try to take the best decision to win. When you are at Spurs you must win. Look, Watford, Liverpool, Inter we lost and there was a lot of criticism like it was the end of the world. You cannot afford to say no I’m not going to compete in this game because you know if you don’t win, the tsunami or storm is going to come. That is the truth. That is why always when we talk about the squad, it’s because we need a strong squad available, 24, 25 players and younger ones in behind helping the first team when you need then. Because during the whole season you need the whole squad, not only a few players who are available always to play.”  (Tottenham Hotspur Official)

“The intensity at training is good; everyone works hard, and everyone wants to play. The recent matches were quite good, but the results weren’t there. We are working very hard during the week, so I hope the points will come. We need points and we try to stay positive and work hard and I hope, in front of our fans, we can grab something against Tottenham”

“We play good games at the moment, but we need to score and do better in front of goal. Against teams with good quality, we have to have great team spirit and togetherness to achieve what we want to achieve. It is important that everybody is behind us.” (HTAFC Official)

Craig Pawson will be referee for the match against Huddersfield. He has already took charge of a Spurs game this campaign at Old Trafford when Spurs won 3-0. In the four Premier League games he has refereed in the Premier League he has produced 3 red cards.

With the positive recent results and the form of Erik Lamela Spurs are expected to win against the club bottom of the table. However no Premier League match is easy and even though Huddersfield are yet to win they will be even more determined to get themselves off the bottom. We predict a hard-fought 2-0 to Spurs with Harry Kane making the most of his rest midweek to get on the scoresheet.