A last-gasp header from Harry Winks gave Spurs a 2-1 victory over Fulham on Sunday to put them seven points ahead of fifth placed Arsenal. It was a dramatic ending to a close match that could’ve gone either way, but Spurs showed the qualities of a top team by once again grinding out a result against a spirited opponent.

With a number of injuries to the squad, Mauricio Pochettino decided to go with a three man defence against Fulham with Kieran Trippier and Danny Rose as wing backs. This allowed Dele Alli and Erik Lamela to roam behind lone striker Fernando Llorente, who was starting his first Premier League match of the season due to the absence of Harry Kane.

In the opening exchanges of the match both teams went close. Christian Eriksen had a shot outside the area which went wide whereas Hugo Lloris did well to save from Ryan Babel after the Fulham debutant was put through on goal.

That feeling you get when you score a last-minute winner…#COYS pic.twitter.com/X0LYD6ZHC9

However it was Fulham who opened the scoring in the most unfortunate of circumstances for Fernando Llorente. In the team to score goals at the other end, Llorente inadvertently turned Jean Michael Seri’s corner kick into his own net. Seri’s delivery was whipped into the near post area and Llorente could do nothing after his sight was blocked by players in front of him.

Llorente almost immediately responded with a goal at the other end but his header from a Jan Vertonghen cross from deep was straight at Fulham goalkeeper Sergio Rico. It was a brilliant cross from the Belgian who was playing on the left hand side of a three man central defence pairing, with Toby Alderweireld on the right and Davinson Sanchez in the middle tasked with containing Aleksandar Mitrovic.

Fulham ended the first half on top and could easily have gone 2-0 up. Babel again had a chance to score for the home side toward the end of the half. Cyrus Christie’s cross was headed on by the Dutch international but he got too much on his header and it sailed over Hugo Lloris’ bar. Soon after Mitrovic had a goal ruled out for offside. Firstly, Andre Schurrle’s volley at the back post was saved by Lloris but only into the patch of Mitrovic who nodded in. However the Serbian was just offside and the replays showed that the assistant referee had made the correct decision.

Pochettino would have demanded a response from his team after the break and that is exactly what he got. Fulham could not deal with a Spurs ball forward and Christian Eriksen had the time to pick out a brilliantly weighted cross to the back post. Dele Alli was there waiting to get the equaliser and could not miss. It was Alli’s 52nd Premier League goal for Spurs, equalling the tally of Gareth Bale.

Eriksen could have gave Spurs the lead soon after but was denied by some brilliant defending by Maxime Le Marchand, who managed to block the Spurs midfielders’ shot. Danny Rose then went even closer for Spurs after a marauding run from left back. Rose cut inside onto his right foot only for his shot to be deflected onto this crossbar to keep the scores level.

It looked like a winner was not going to come for Spurs, particularly when Fernando Llorente missed a guilt edge change with ten minutes remaining. He did not meet Rose’s free kick with any conviction and so saw his header from five yards go wide. Spurs really seemed to be out of look when, with five minutes remaining, Dele Alli had to be substituted because of what looked like a nasty hamstring injury.

Georges Kevin Nkoudou came on in his place for his first Premier League appearance of the season and it would be a five minutes to remember for the forgotten man.

In the dying seconds of the game, Nkoudou picked up the ball on the left hand touchline, cut inside and delivered in a wicked delivery into the Fulham area. Four Spurs players were in there and Nkoudou’s delivery was inch perfect for Harry Winks to run onto and nod into the goal to give Spurs a last minute winner. Winks’ header sparked wild celebrations between the players as well as the fans in the away end at Craven Cottage.

It was a brilliant result for Spurs and Pochettino but Fulham were unlucky not to get something more from the game and Ranieri looked particularly despondent at the final whistle. 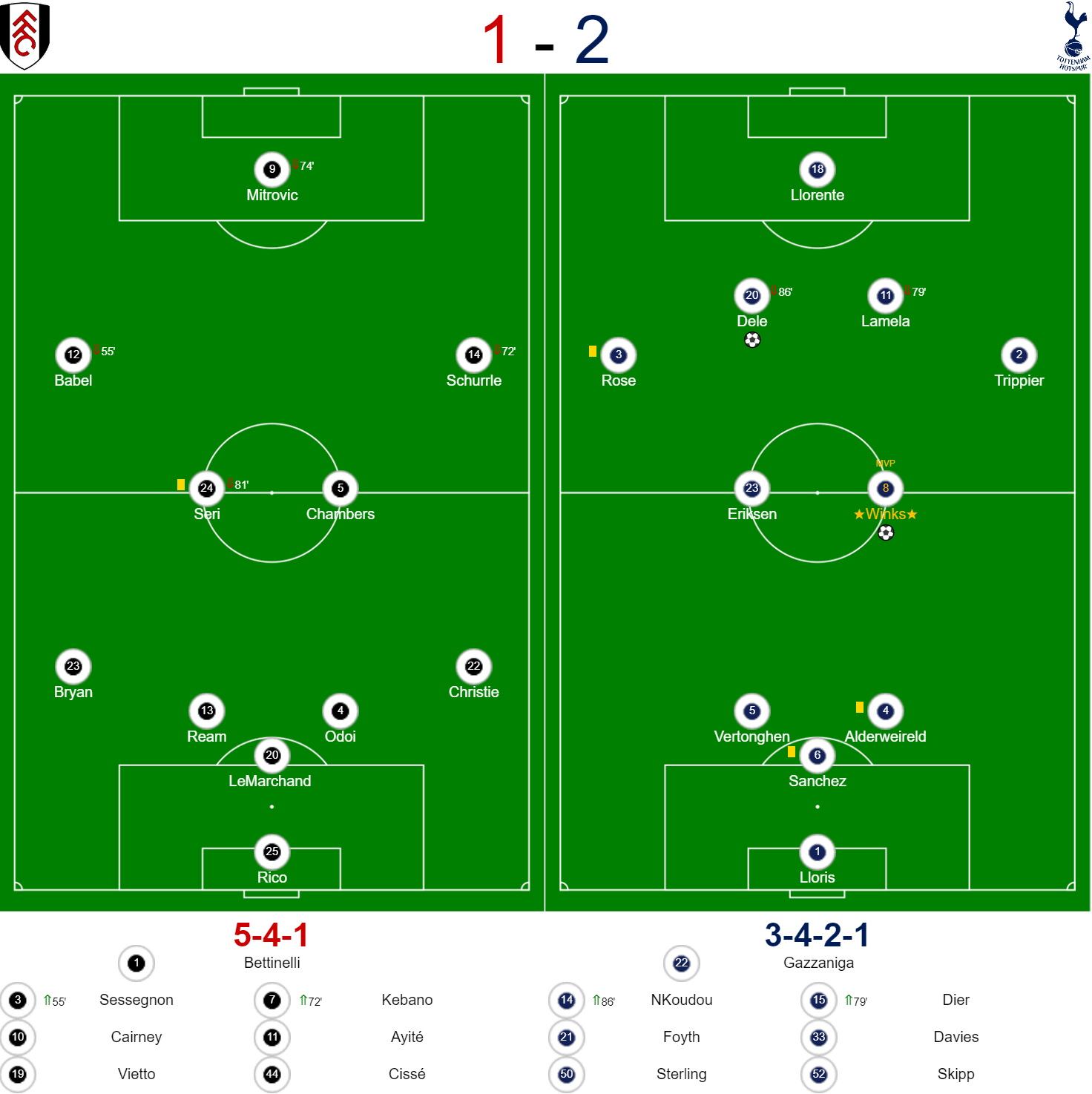 “I am so happy with the three points, it wasn’t the best game. The performance was very solid and we scored three goals in the end. But so happy because in the second half we showed great character and personality. In the first half it was a little bit difficult. After Llorente scored the own goal, we struggled from set pieces and they played long balls. It was difficult for us to sort that problem but I think overall we dominated the game. Second half I was so happy with. The last action with Harry Winks was a brilliant action that showed the belief of not only him but the team to keep going, try to win until the end. That talked very highly about him and the team.” (Football.london)

“Unbelievable. Our first half was fantastic and we also had a penalty the referee didn’t see. There was a big penalty on Mitrovic. Second half we controlled the match very well in different ways. We gave a gift with the first goal and the second goal is unbelievable. We lack experience. Calm, stay calm, keep possession, finish the match.” (BBC Sport)

It’s easy to pick Harry Winks as the man of the match after his last minute winner but his all round performance was deserving of a goal. He looked lively in the first half and tried to inspire his team forward when they did not look at their most potent after Fulham’s opener. Winks also won possession eleven times which was more than any other player and was the player who instigated the Spurs attack which ended with his winning header.

Next up for Spurs are two domestic cup games. This Thursday they have the second leg of their Carabao Cup semi-final versus Chelsea at Stamford Bridge where they will be looking to protect their 1-0 lead. After that, on Sunday Spurs are in action in the fourth round of the FA Cup away against Crystal Palace.