After the disappointment of the result against Manchester United last Sunday, Spurs have had a full week to prepare for the trip to Craven Cottage to face Fulham this weekend. The Premier League title looks out of reach for Spurs after that defeat but Mauricio Pochettino would have been pleased with the overall performance of his team, who deserved at least a point at Wembley.

Fulham are at the other end of the Premier League table, in nineteenth position, and manager Claudio Ranieri has bolstered his ranks with the signing of former Liverpool winger Ryan Babel from Besiktas. Having only won three of their Premier League matches this season, the Tinkerman will be desperately hoping that the Dutch international can inspire Fulham to beat the drop this campaign.

Fulham have recently came out of a spell of games that, on paper, looked favourable to them. However they have only emerged with five points from those five matches, losing their most recent game to Burnley. To make matters worse, five of their next six home matches are against teams currently in the top 6 of the Premier League and so both players and manager will know that time is running out if they wish to remain in the Premier League for another season.

Spurs have been boosted by the news that Eric Dier has returned to full training after recovering from appendicitis. It remains to be seen whether Pochettino will use him from the start given the lack of options he has in midfield but it is more likely that he’ll be on the bench.

In his press conference Pochettino confirmed that Moussa Sissoko’s groin strain, which was picked up against Manchester United, will keep him out for two weeks. It was not as bad as first feared but still means the French international will miss the next five games at least for Spurs.

Elsewhere Victor Wanyama has begun to integrate into training whereas Lucas Moura and Harry Kane have commenced rehabilitation. Another player that will be missing is Heung-min Son, who is away on international duty with South Korea.

Claudio Ranieri revealed in his press conference that there are no new injuries to the Fulham team. That means Alfie Mawson will still be out with a knee injury and that Andre-Frank Zambo Anguissa is also a fitness doubt.

Ryan Babel could be in contention to start for Fulham having joined until the end of the season from Besiktas, otherwise Ranieri is likely to go with the same team that lost 2-1 to Burnley last time out. That means a five man defence and a central midfield containing Jean Michaël Seri and Calum Chambers. 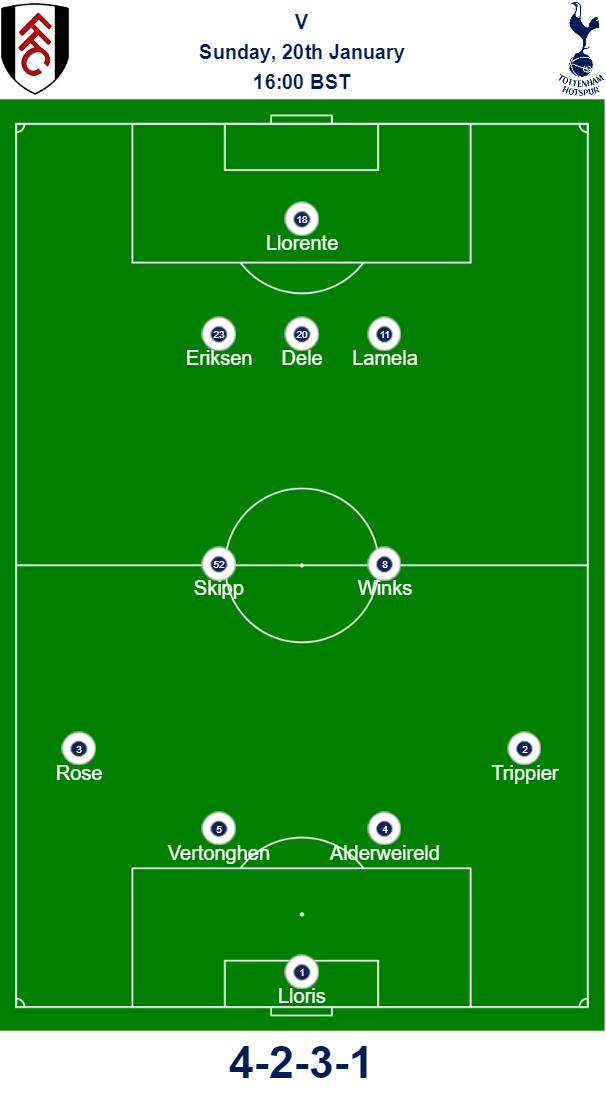 For the first time since November, Spurs have had no midweek match and so Pochettino will not have to worry too much about rotating his team. What he will have to worry about is the mounting Spurs injury list, meaning that he has limited options in central midfield and up front. There is the slight possibility that he could switch to three at the back against Fulham, however the four man defence has served Spurs well in the last few months so they are expected to continue with that.

One of either Davinson Sanchez, Jan Vertonghen and Toby Alderweireld will therefore be on the bench and we expect Sanchez to be the unfortunate one to miss out. At full back Danny Rose may come in for Ben Davies whereas Kieran Trippier will continue at right back after impressing against Manchester United.

Harry Winks and Oliver Skipp are the only two fit natural central midfielders at the club and both are likely to start. Despite Skipp’s age, Pochettino trusts him so will have no qualms about giving him just his second Premier League start.

That would mean Christian Eriksen and Dele Alli could play further forward for Spurs, despite boht being capable of playing in a deeper role, with Erik Lamela expected to start on the right hand side or even as a striker to make up for Heung-min Son’s absence.

With Harry Kane out injured, the stage is set for Fernando Llorente. Still yet to start in the league this season for Spurs, the veteran Spaniard has impressed in the domestic cups and will be the focal point for Spurs on Sunday against Fulham.

I think it’s normal that we are thinking to give him [Llorente] the possibility to start on Sunday. Of course it’s in my mind. I’ve still not decided the starting XI, but it’s one of the possibilities that we have in mind.

I’ll tell you at the end of the match if there is something good for us. There is no Son or Kane but there are other players and champions and they can change systems and do what Pochettino wants and it will be a tough match. We are ready and I hope sooner than later some luck turns.

Every time I prepare the team to improve our mistakes and play our football. Against Spurs we have to be very awake because every situation is dangerous. But we are dangerous in counter attack and when we play. (football.london)

Fulham v Spurs One to Watch

Fulham’s main threat will be Serbian striker Aleksandar Mitrovic, who has eight goals and two assists in the Premier League this season. The target man is always a threat in the air and his hold up play will be key on Sunday. The acquisition of Ryan Babel could also help Mitrovic, who is at his best when attacking crosses in the opposition penalty area.

Mitrovic could also become the fourth player to score in his first four Premier League matches against Spurs. The other three players are Mark Bright, Ruud van Nistelrooy and Obafemi Martins.

The referee for Fulham v Spurs will be Craig Pawson. That could be a good omen for Spurs as in the three Premier League matches in which Pawson has officiated in, Spurs have won every game without conceding. Pawson was the official for Spurs’ away victories over Manchester United, Huddersfield and Leicester last year and Spurs will be hoping that he oversees another away win on Sunday.

With the amount of injuries that Spurs have, Fulham may be quietly confident that they can cause a shock on Sunday. However if players like Dele Alli and Christian Eriksen stamp their authority on the game, then they should be able to dictate matters in the middle of the park. It remains to be seen how the rest of the Spurs players cope without Harry Kane but we think they’ll have enough to get past Fulham.

Our prediction is Fulham 1-2 Spurs.