Spurs produced a wonderful away performance at Goodison Park as a 6-2 victory against Everton in their last match before Christmas ensured they were right in the title race.

There were some brilliant team goals as well as individual efforts with Harry Kane and Heung-min Son both scoring twice. Christian Eriksen perhaps scored the best of the lot with a brilliant volley from twenty yards out that left Everton keeper Jordan Pickford helpless.

Dele Alli scored the other goal for Spurs as Mauricio Pochettino’s side kept their grip in the top three by moving five points ahead of London rivals Chelsea. They are now just two points behind pre-season title favourites Manchester City and six points behind Jurgen Klopp’s Liverpool.

However the game did not start in Spurs’ favour as former Arsenal man Theo Walcott gave Everton the lead after twenty-one minutes. That came against the run of play as Spurs were the better side at the start but Gylfi Sigurdsson’s pass found Dominic Calvert-Lewin who played in a ball to Walcott who dispatched with ease. Everton could’ve gone 2-0 up had Calvert-Lewin not been penalised for fouling Davinson Sanchez in the area.

Spurs’ equaliser came about after a mix up between Pickford and Kurt Zouma. The pair failed to clear which allowed Son to pick up the loose ball and fire into an empty net. Before the Toffees knew it, they were behind when Dele Alli tapped home after Son’s shot was saved by Pickford. There was still time for another goal before the halfway stage as Kane converted after Kieran Trippier’s free-kick came back off the post straight into his path.

Into the second half, Christian Eriksen’s sublime volley put the match out of reach for Everton and Gylfi Sigurdsson’s strike was a mere consolation but at the time threatened to ignite an Everton comeback when he made it 4-2.

Spurs however thwarted any threat of a revival as Erik Lamela set up Son for his second of the match to make it 5-2. Harry Kane ended the scoring with around fifteen minutes left when he converted Son’s cross for his second and Tottenham Hotspurs’ sixth of the evening to cap off a brilliant away performance from Mauricio Pochettino’s team. 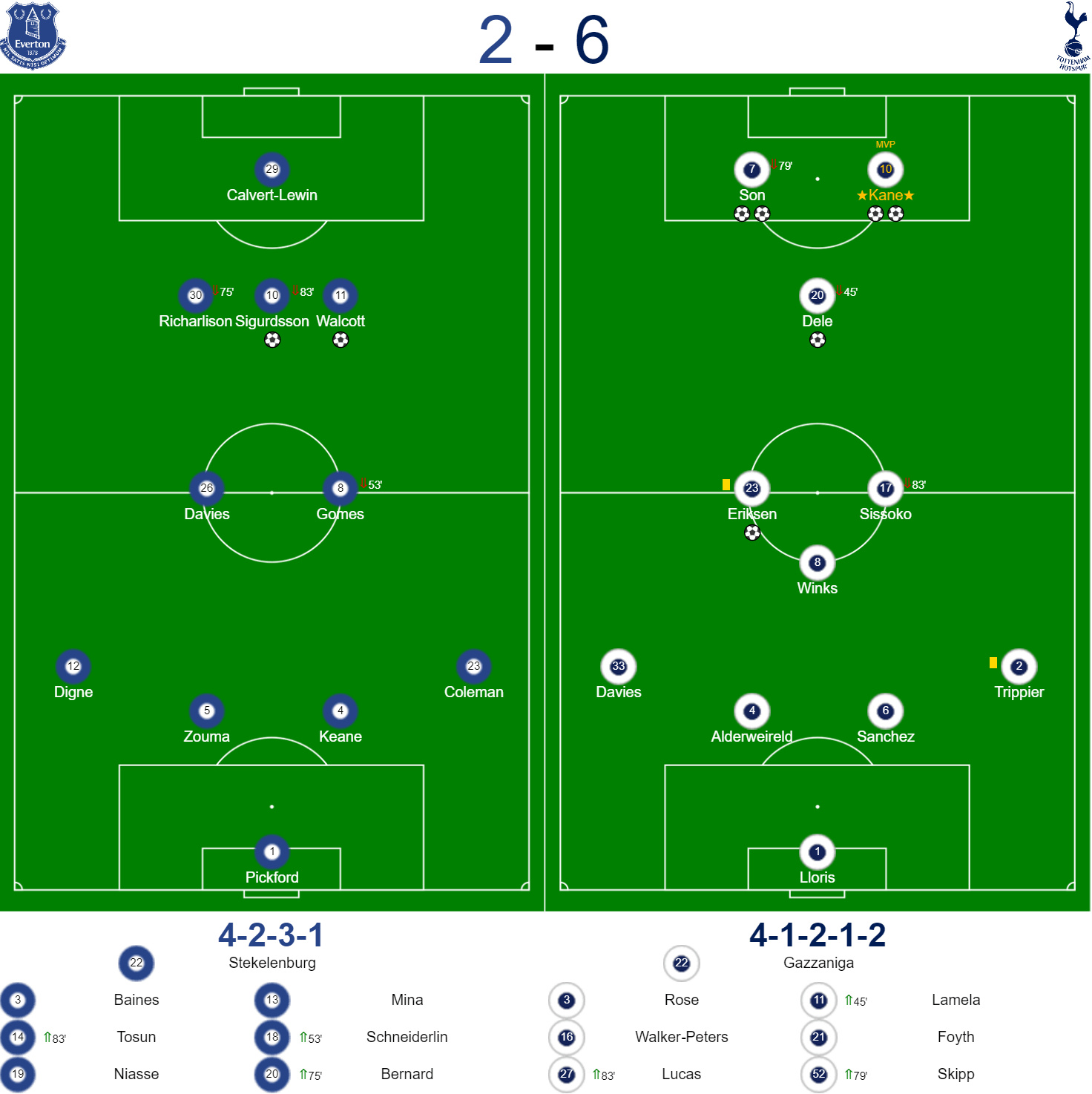