Harry Kane scored the only goal of the game to cap off a wonderful away performance from Spurs in the Champions League, which saw them get to the quarter-finals for only the second time. It was a great defensive performance from Mauricio Pochettino’s side, who were able to fend off pressure from Dortmund in the first half as they tried to make amends for their 3-0 first leg loss, before going on to control the game in the second period.

Kane’s goal at the start of the second half sealed the fate of the hosts as it put Spurs 4-0 up on aggregate. That meant Dortmund needed five second-half goals but instead, a fine goalkeeping display from Hugo Lloris ensured that Spurs kept a clean sheet at Signal Iduna Park. Lloris and the whole Spurs defence were excellent, with Jan Vertonghen once again putting in a wonderful display in the Champions League.

It was a superb all-round European away performance and will give Pochettino and his players a huge lift going into the match with Southampton at the weekend after a difficult last week in the Premier League.

There's no better sight than that for a striker 😍 pic.twitter.com/TlUZjtPW0u

Dortmund made six changes to the side that lost out at Wembley, including the return of top scorers Paco Alcacer and Marco Reus and started the game at a blistering pace. In total, they had eleven attempts at Lloris’ goal in the first half but Spurs stood solid with some heroic defending. Vertonghen made a match-defining tackle on Reus to prevent him from what looked like a routine chance and Davinson Sanchez also made a vital interception to thwart Paco Alcacer early on.

It was those two attackers that caused most of the problems for Spurs, with Jadon Sancho having a quiet evening after impressing at Wembley. Reus had a deflected shot saved by Lloris and Christian Eriksen was able to help out his team defensively by stopping a shot from Mario Gotze as the home side continued to pile on the pressure.

At the other end, Spurs had one massive chance in the first half which they failed to take. It went to Heung-min Son, who has scored more goals against Borussia Dortmund than any other opponent, but he could not find the target after being put through by Eriksen. Son did have a valid claim for a penalty turned down as he was put off by Dortmund right-back Marius Wolf when taking his shot but the incident was not referred to by VAR.

After half an hour Dortmund again had another siege on the Spurs goal. Alcacer had a deflected effort that went wide and from the resulting corner, Julian Weigl had two chances. The first was stopped by Lloris and the second was brilliantly blocked by Ben Davies, demonstrating how all the members of Spurs’ defence were throwing their bodies on the line.

Pochettino decided to make a slight tactical tweak, with Son coming to play on the left-hand side, instead of partnering Kane up front, to make a 5-4-1 formation. However, Dortmund continued to push and Reus almost scored with a spectacular volley from outside the area direct from a corner but for a deflection and Lloris again had to make a save, this time from Gotze’s curling effort which he got to with his fingertips.

However, there was a slight momentum shift at the end of the first half as Spurs started to see more of the ball and began to move it around confidently. This spell of pressure carried on into the second half and after forty-nine minutes Kane grabbed the winning goal.

He was found by Moussa Sissoko, who had another exceptional match for Spurs, and had a direct run through at Roman Burki in the Dortmund goal. Kane showed his quality by setting himself and making his finish seem simple to give Spurs their away goal and deny Dortmund of any way back into the tie. In the process of scoring, Kane became Spurs’ highest goalscorer in European competitions with twenty-four goals.

Borussia Dortmund knew that the tie was over after the strike and Spurs nearly took full advantage of that with Kane going close again soon after. Chelsea bound Christian Pulisic had a header that went over and Alcacer was once again denied by Lloris, but no matter what they threw at Spurs, Dortmund could just not score.

Substitute Erik Lamela should have scored in stoppage time for Spurs but the job had already done and the 4-0 aggregate win saw Spurs get to the quarter-final stage for the first time since 2011. The draw for the Champions League quarter-finals will take place next Friday on 15th March at 11:00 GMT. 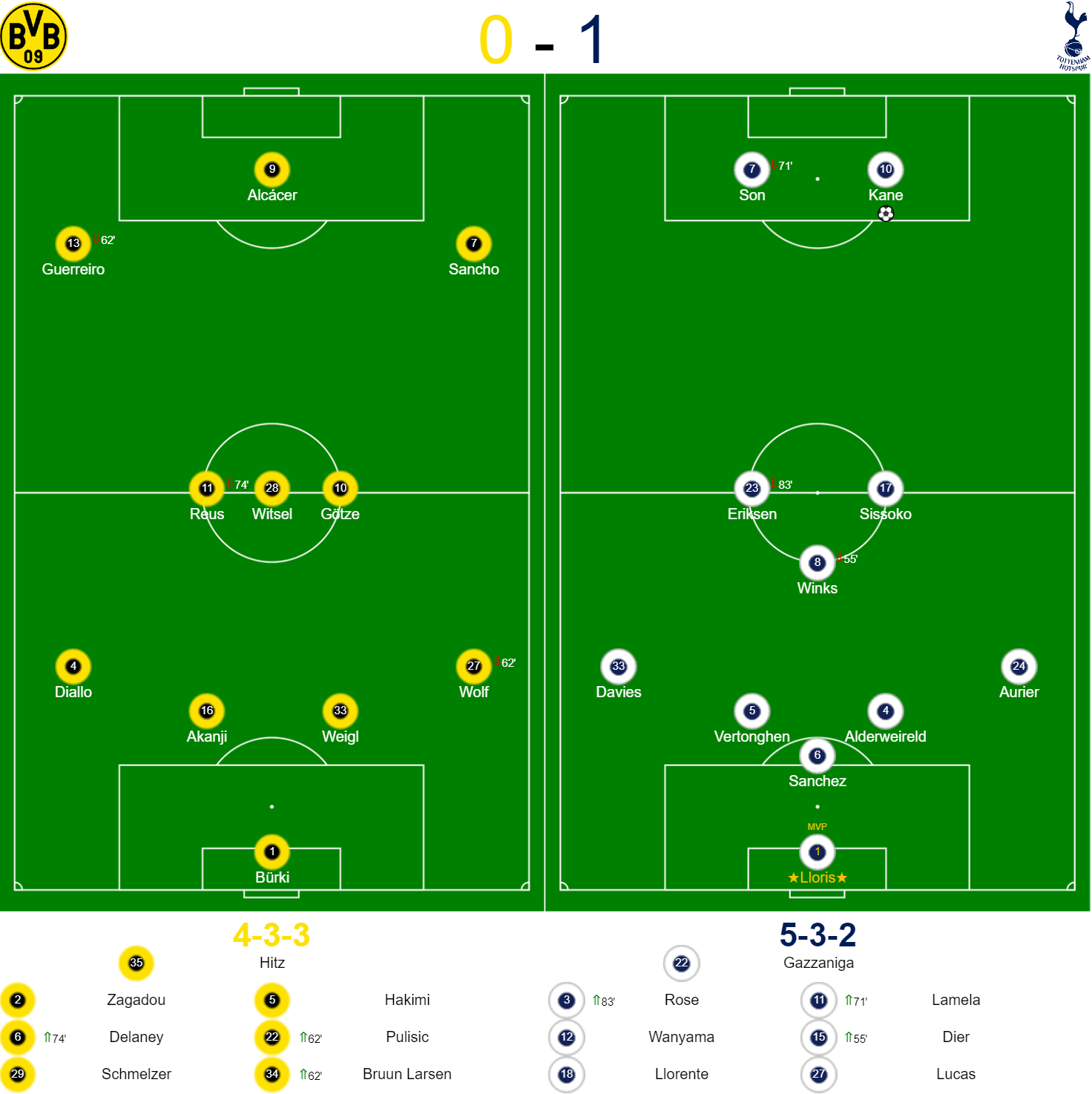 “Hugo Lloris was great. We conceded more chances than we expected but that’s football. After losing in the first leg they had nothing to lose.

“In the last 10 minutes of the first half, it was difficult for us. They started to play a little bit more and then in the first action, when we were able to connect, we managed to score the goal.

“Now it’s about enjoying that we are in the quarter-finals. We need to feel proud.” (BBC Sport)

“For me, there was only one team out there in the first half. We need to continue playing like that.” (goal.com)

For his numerous saves in the first half, the man of the match has to be Hugo Lloris. All the Spurs defence were brilliant but his multiple stops changed the course of the match and allowed Spurs to get into the game once they had weathered the Dortmund storm.

Spurs travel to Southampton on Saturday for their next Premier League match. They then currently have a three-week break before their next encounter because of the March international break and the fact that they are not involved in the FA Cup quarter-finals.