Yesterday saw the termination of Nuno Espirito Santo as Tottenham Hotspur manager after just 17 games in charge of the club. Following a 3-0 loss to Man Utd this weekend, Daniel Levy and Fabio Paratici decided that another managerial direction was required.

Enter Antonio Conte. A world-class manager with extensive experience leading top international and national teams in a very successful career. The former Chelsea, Italy and Inter Milan boss has signed a contract until 2023, with an option to extend depending on performance. Welcome to North London, Antonio!

✍️ We are delighted to announce the appointment of Antonio Conte as our Head Coach on a contract until the summer of 2023, with an option to extend.

Conte stated that he is,

“Extremely happy to return to coaching, and to do so at a Premier League club that has the ambition to be a protagonist again,”

This is not the first time Conte has managed in London. The Italian coach won the Premier League title with Chelsea in his first season with the Blues, in 2016/17. He then went on to win the F.A Cup in the following season.

Conte then moved from Chelsea to Inter, where he guided them to their first Serie A title in 11 years. Today, 2nd November 2021 marks 5,000 days since Spurs last won any silverware. Hopefully, Mr. Conte can turn that around. 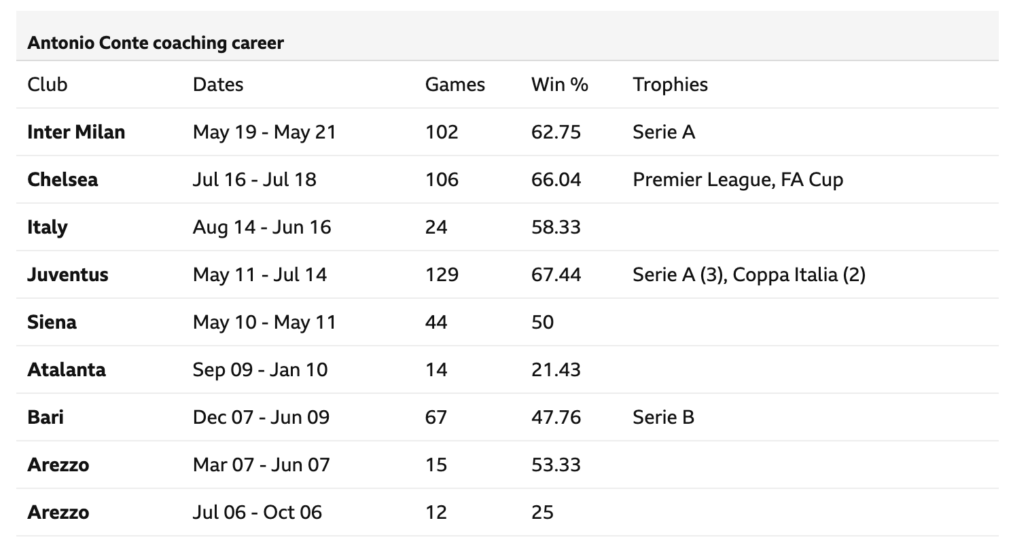 Conte could have been a summer signing

Jose Mourinho was sacked as Tottenham Manager at the beginning of the summer and Conte was on the list of favourites to replace him. Levy and Paratici entered negotiations with Conte but talks came to a halt before Nuno was appointed. Many people believe the reason they never got the deal over the line was due to differences in opinion on the Spurs transfer budget.

Conte however, claimed in an interview today that,

“Last summer our union did not happen because the end of my relationship with Inter was still too recent and emotionally too involved with the end of the season, so I felt that it wasn’t yet the right time to return to coaching. I can’t wait to start working to convey to the team and the fans the passion, mentality and determination that have always distinguished me, as a player and as a coach.”

Paratici is an influential character in European football. A man with many links and connections, the Managing Director of Football believes in the Spurs project and believes Conte to be the man to deliver the performances on the pitch.

In an interview, Paratici claimed that,

“His track record speaks for itself, with vast experience and trophies in both Italy and England, I know first hand the qualities Antonio can bring to us, having worked with him at Juventus, and look forward to seeing his work with our talented group of players.”

Conte is a coach that engrains a ‘firm but fair’ mentality into his players. Those who do not put in the effort during training will certainly know about it and will most likely find their game time diminished as a result.

🗣 "Welcome back to the Premier League, his career speaks perfectly for himself."

Pep Guardiola welcomes Antonio Conte back to the Premier League and calls him an outstanding manager pic.twitter.com/VAbfGmvl6t

There is no other way to put it, Antonio Conte is one of the best managers in football during this current generation. The Premier League has become so competitive and exciting that yet another legend of football has decided to come over to the UK to join the party. Conte’s tactical duels with the likes of Jurgen Klopp, Thomas Thuchel and Pep Guardiola will be a fascinating spectacle for all.

Antonio Conte will take charge of Tottenham Hotspur for the first time against Vitesse in the Europa Conference League. Spurs are currently 3rd in Group G and need to get all three points to leapfrog the travelling Dutch side in the table.

Make sure you’re there to witness Conte’s first game in charge! Tickets are available at just £49 per person; this includes complimentary food and drink, a padded seat and VIP access to lounge areas.

Conte takes charge with Spurs sitting 9th in the league after 10 games. They are 5 points behind West Ham who currently occupy the 4th spot. Conte has an almighty job on his hands if he wants to secure Champions League football next season. His Premier League crusade starts with Everton, away at Goodison Park on Sunday.

Tottenham are then at home to Leeds United after the international break.

This appointment is an incredibly exciting milestone for Spurs, let’s see what Mr. Conte can do! Come on you Spurs.